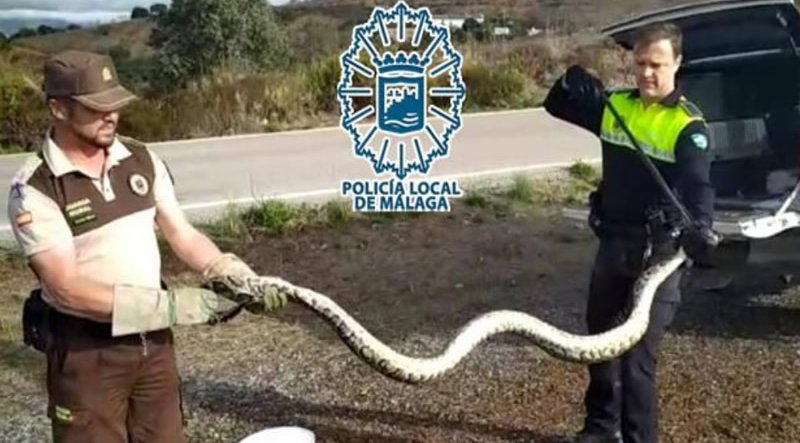 A three-metre long python was captured by officers from the Nature Protection Group – Grupona – of Malaga Local Police of Malaga on Tuesday, November 2. With the assistance of a rural ranger from the Montes de Malaga, the reptile was caught in the vicinity of the MA-3111 highway, between the towns of Olias and Colmenar. Specifically, in the Santo Pita area.

This rather large python-molurus was reported to the Montes de Malaga police by a resident who spotted it at around 8am. This station subsequently notified Grupona, who mobilised a specialised unit to the location. They located the snake about two metres from the roadside in some bushes.
Using the chaff and the snake-catching tweezers, the officers managed to snare the creature, holding it by its head to avoid any possible attack. This way of holding it also minimises any damage to the snake. Its immediate reaction on being grabbed was to try to coil itself around the officer, at which point the other cop grabbed the creature’s tail.
With some difficulty, due to the reptile’s strength, the officers put it into a plastic container for transportation. It was transferred to the Municipal Zoosanitary Center, where it was inspected, and weighed in at eight kilos, and measured just over three metres in length.
This species of snake, also known as the Indian python, can grow up to six metres long, and weigh up to 100 kilos. It is recognisable by its typically triangular head, small in size compared to the length of its body. Human deaths are rarely associated with this animal, but those that occur are mostly the result of their being kept as pets.
Malaga Local Police of Malaga has warned of the risk of introducing such exotic and invasive animals, or abandoning them to their fate, in our ecosystems. They not only put biodiversity at risk, but doing so can lead to a fine of up to €300,000 euros, and in some cases, criminal consequences, as reported by diariosur.es.