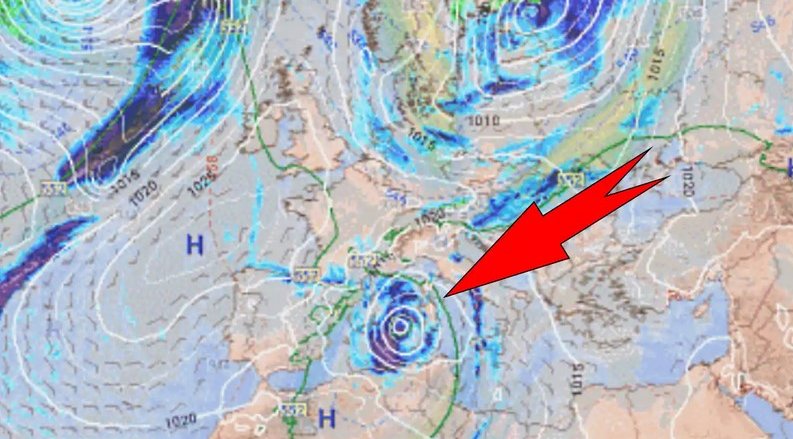 Over the next few days, the change in the weather that began during the All Saints’ holiday period will continue to deepen. This is the prediction of Francisco Martin, a weather expert from Meteored (www.tiempo.com).

The Mediterranean and especially the Balearic Islands should see the worst of this change. This is due to the formation of an intense Mediterranean cyclone, which is expected in a process of Mediterranean cyclogenesis, which could even acquire the characteristics of a ‘medicane’, a ‘Mediterranean hurricane’. Its origin comes from a DANA that will appear towards the weekend.

Convective clouds will develop from a centre of low pressure on the surface located to the north of Algeria, over the still slightly warm Mediterranean Sea. As a consequence, this situation will give rise to an intense windstorm, and rough seas in the western Mediterranean. Its centre could remain over open waters, but the effects would be felt over land areas and nearby islands, and perhaps in the Balearic Islands.

Predictably, as storms form around the centre of the cyclone, the intense wind zones in the mid and upper troposphere will move away from the area of development of the Mediterranean cyclone. The result can be a favourable situation for tropical features at least until late Monday 8.

According to Antonio Maldonado, Meteored’s Meteorology Director, on Friday, November 5, an anticyclonic wedge will penetrate the mainland, and there may be light rainfall in the Cantabrian regions, the upper Ebro, and the Pyrenees. Snow will fall above 1100 metres, with a tendency for the altitude to drop.

Thundery showers will occur in parts of the Valencian Community, the southeast of the peninsula and the Balearic Islands. In addition, there will be the possibility of minor showers in the north of the Canary Islands. Snow is also possible in the Cantabrian and Iberian mountain ranges.

Temperatures will fall in the Canary Islands and remain unchanged in the rest, with light frosts in the mountain ranges and on the Castilian-Leonese plateau. North winds will prevail, with strong north winds in the Ampurdan and the Balearic Islands.

On Saturday 6, the sky will be cloudy in the Cantabrian regions, the upper Ebro, and the Pyrenees with the possibility of light rainfall. The southern half of the Mediterranean regions, Ceuta, Melilla, and the Balearic Islands will have partly cloudy conditions, with a risk of stormy showers, possibly heavy in the archipelago. North Tenerife and Gran Canaria will remain cloudy.

There will be little change in temperatures and northeasterly winds will prevail, which will be strong in the Balearic Islands and the Emporda. Moderate easterly in the Strait of Gibraltar.

Throughout Sunday 7, Cantabrian regions, Navarre, and the Pyrenees will continue cloudy, with the possibility of light rainfall. It will also be partly cloudy in the north of Galicia, the Iberian mountain range, and the Central System

There will be a risk of showers, locally accompanied by thunderstorms, in Catalonia, Valencia, Melilla, and, above all, the Balearic archipelago. In the rest of the Peninsula and in the south of the Canary Islands, sunny weather will prevail.

There will be no significant changes in temperatures, with light frosts in the mountain ranges, and in some areas of both plateaus. Highs of 24ºC are forecast in the two Canary capitals, with 22ºC in Alicante and Ceuta. Winds from the northeast will continue to predominate, as reported by elespanol.es.