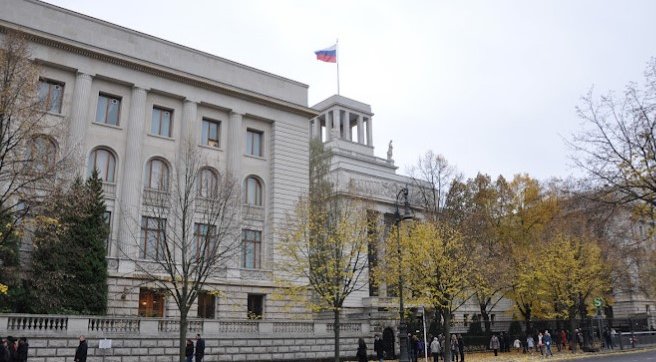 A 35-year-old Russian diplomat, named as Kirill Zhalo, has been found dead on the street outside Moscow’s embassy in Berlin. It is believed he fell from a third-floor window. Mr Zhalo was the son of a top-ranking Russian intelligence officer.

The news was broken by German website Der Spiegel. They claim that the man – according to German authorities – who was working as a second secretary in the embassy, was in fact an undercover spy.

It is known that the body was discovered on October 19, at 7am, lying in a pool of blood. In line with standard protocol, the next day it was flown directly to Moscow. There has been no report as to his cause of death, or whether he was alive before hitting the ground. This is because no autopsy was allowed, and Local Police were not able to investigate.

An investigative journalism website called Bellingcat has linked the dead body to the family of the deputy head of the Second Directorate of Russia’s security agency, General Alexei Zhalo. They discovered that both men shared addresses in Rostov-on-Don, and also in Moscow. This information was traced after using leaked car number plate databases.

The Second Directorate is a section of Russia’s infamous FSB security forces, which are known to enforce operations that control opposition politicians and journalists, and dissidents. In August 2019, in broad daylight, Chechen rebel commander Zelimkhan Khangoshvili was killed in the Tiergarten in Berlin, and Bellingcat has claimed the Directorate was responsible.

Christo Grozev, Bellingcat’s main investigator, took to Twitter to point out that the deceased had mover two months earlier from Vienna to Berlin. “That may just be a coincidence”, wrote Grozev, “But German authorities believe the killer received support on the ground in Berlin”.

Officials in Moscow have denied any involvement, but German authorities have expelled two Russian diplomats, seemingly upset at an act they described as a ‘contract killing’ on their territory, as reported by independent.co.uk.