On 50th day of the eruption, the La Palma lava flow increases 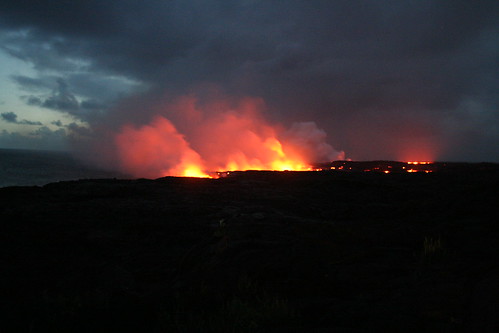 The experts monitoring the Cumbre Vieja eruption have said the La Palma lava flow has increased this weekend, 50 days after the beginning of the event. The warning comes after several days of lower levels of magma expulsion. The Canary Islands Volcanic Emergency Plan (Pevloca) have confirmed in recent days it is much too early to think we are reaching the end of the La Palma lava flow or the Cumbre Vieja eruption.

“This phenomenon, since its inception, is accompanied by many changes in intensity. There may be episodes of an apparent lack of intensity during a period, which is reflected in the tremor (prolonged volcanic vibrations) and in less voluminous flows, and then there may be an intensification without this representing more than the natural behaviour of these eruptions”, said the head of volcanology at the National Geographic Institute (IGN), Carmen Lopez.

This increase in lava is not stretching the surface area of the magma, the tongues are standing still. The current output has pushed it’s way into the existing runoff and is filling gaps and increasing the height. Currently, the magma has reached 983.44 hectares and the perimeter of this surface is 56.2 kilometres.

Miguel Angel Morcuende, the technical director of Pevolca, explains that the lava may started spreading out again but not under the current levels of output. He said: “We depend fundamentally on the opening of the cone, where the lava is expelled and where does it move. As long as the current situation is maintained, we have to understand that it is favourable for our objective that there is no more destroyed surface or more damage”.

The ash clouds coming from the eruption has increased over the last few hours also. While air quality is ok throughout most of the island, it is “extremely unfavourable” in Los Llanos de Aridane at the foot of the volcano. The experts have reiterated the need for FFP2 masks in this area and reminded people to limit their travel as much as possible.

The level of seismic activity has reduced compared to previous days but the Pevolca report indicates “The current level of seismicity continues to indicate that it is possible that more felt earthquakes will occur.”