Woman in stitches after camera catches handyman slating her flat 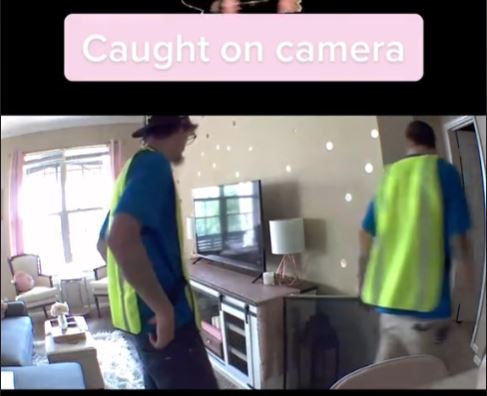 Woman left in stitches after camera catches a handyman slating her flat. The video went viral on TikTok and amused many people.

The flat owner shared the video on TikTok and joked: “Turns out the maintenance guys at my apartment had opinions about my interior design.”

Kat Hope Jones likes pink and has styled her apartment to match her tastes. Her flat comes complete with a pink refrigerator. Maintenance workers were visiting her home when she was out. She has a dog camera though to make sure that her pet pooch Hudson is safe and well.

The camera captured the maintenance workers as they slated her apartment. In the video one of the men said: “Everything’s pink, the refrigerator, the washing machine….she’s got pink s*** everywhere.”

The other worker simply replied: “Yuck.” The pair can then be seen heading away from the camera that they do not seem to have noticed.

Kat shared the video on TikTok and it went viral. One person liked her decor and commented: “They’re mad they don’t have taste.”

Another TikTok user said: “They can have their own opinion, not everyone likes the same stuff.”

A fellow maintenance worker shared a handy tip. He said: “I’ve worked in the industry for ten years now and my tech tells me to always act like there’s a camera inside, even if you can’t see one.”

Kat found some of the other comments on the video a little harsh. She released another video asking commentators to be respectful of the workers. She said: “I don’t think it’s cool to be mean. I think we’ve all been mistreated before in our life and had someone say something that wasn’t kind to us.”

A fan replied: “I love that you’re not upset like some of your comments, it’s hilarious. Everyone has different tastes, cute house though.”

Kat soon responded and said: “It was super silly. What’s even funnier is that the girl who lives across the hall from me has a super pink apartment too.”