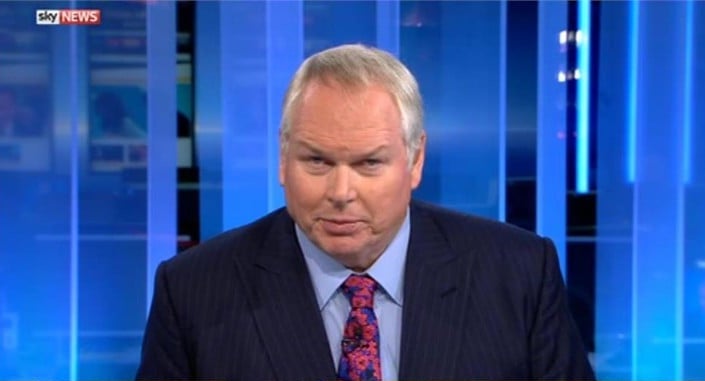 Adam Boulton to quit Sky News after 33 years and will step down as the channel’s editor at large and presenter on New Year’s Eve.

VETERAN broadcaster Adam Boulton has announced that he is to step away from Sky News after 33 years at the channel.

Boulton joined the channel in 1989 where he acted as political editor upon the channel’s launch before stepping into the role of editor-at-large in 2014.

But it appears that Boulton believes it is time for a new generation to take over.

Speaking to The Times, 62-year-old Boulton said that it was time to accept “to a certain point” that he is part of the “tail-end baby-boomers.”

“And there’s a kind of move against the baby-boomers and the fact that we’ve had less time at the peak is just the way it goes.”

He continued: “It looks like the direction which Sky News wants to go over the next few years is not one that’s a particularly good fit for me. There’s always a changing of the guard in television. Television is very sensitive to the idea of diversity.”

During his broadcast this morning (November 10), Adam Boulton said he was “immensely proud” of Sky News’ achievements.

“It has been an honour to be part of the team that founded Britain’s first rolling news channel, transforming the way news and politics are covered in this country and around the world. My career has been at two start-ups – TV-am and Sky,” he continued.

“Now, after six Prime Ministers, seven US Presidents, and eight Sky CEOs, it is time for new things. As the mainstream media evolve, I will continue to broadcast and write for Sky, Reaction, and others.”