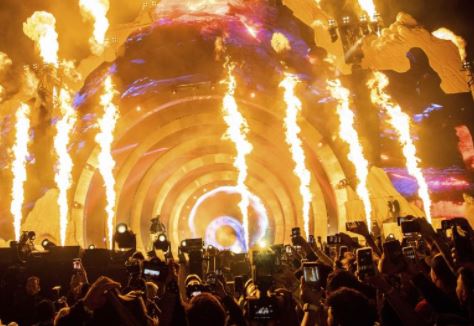 The disaster at the Astroworld festival in Texas last weekend was captured on hours of mobile phone footage like only a modern tragedy can be. However, the satanic conspiracy theories that are now flooding TikTok alongside the clips seem to be age-old. Eight people died in Astroworld crowd crush as panicked festival-goers rushed towards the stage while rapper Travis Scott was performing and now the star is being accused of orchestrating a huge satanic ritual.

Comments are flooding different TikTok videos with confident accusations of misdeeds such as “this ain’t a festival, it’s a sacrifice”, and the music industry is demonic and collects souls”, with the latter comment gaining 34,000 likes. Although this may seem ridiculous, the theory is spreading like wildfire through the social media platform with people searching for terms like “Illuminati” and “demonic” alongside the name Astroworld.

Experts are saying this perfectly illustrates how younger social media users are equally susceptible to fringe conspiracy theories as their older counterparts. Although they may be more technologically savvy, the ability of interesting satanic conspiracy theories to catch the imagination seems to cross generational divides.

“We have this stereotype of conspiracy theorists being older people on social media, but young people can in some ways be more susceptible. We know that human brains really like sensational content, and teenage brains even more so because they are still developing,” said Jennifer Stromer-Galley, a professor studying social media platforms at Syracuse University.

The so-called satanic imagery people are claiming to have seen at the festival ranges from the imagery of flames and burning doves to calling the stage “an inverted cross leading to hell”. Others leant into misinformation, citing the erroneous fact that Travis Scott and fellow rapper Drake “were born 66 months and 6 days apart”.

Ioana Literat, an associate professor of communication studying social media at Teachers College, Columbia University originally spoke to The Guardian and said, “This is an indication of just how fertile a ground TikTok is for creating and sharing misinformation and conspiracy theories. With the reign of social media platforms like TikTok, there’s the potential for greater and further spread, and a certain rise in sophistication in terms of the deployment of media resources to craft these arguments.”

A spokesman for TikTok said the satanic conspiracy theories content violated its community guidelines and it was taking action against the material.