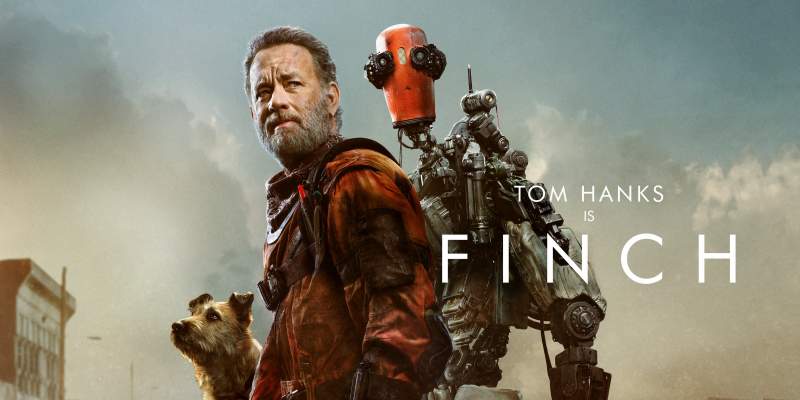 Finch stars Tom Hanks, Caleb Landry Jones and a very good dog on a heartfelt road trip – what more could you want?

Finch, released on Apple TV on November 5 and directed by Miguel Sapochnik (Game of Thrones), is a family film that follows a man, a human-like robot and a scavenging robot that resembles Wall-E on a road trip to the Golden Gate Bridge in a post-apocalyptic future.

Finch, played by Tom Hanks (Forrest Gump) is struggling to survive both physically and mentally in a post-apocalyptic world that is slowly killing him. Finch invents an AI-based robot, Jeff, played by Caleb Landry Jones (Get Out) to help him to carry out tasks and ultimately take care of his beloved dog Goodyear when he dies.

I was sure this film was going to be a tear-jerker, and I was right, but not for the reasons I expected. It’s also a heartwarming story about humans, loss and companionship, with Finch teaching Jeff about life and trust as age and the effects of radiation slowly catch up with him.

Very little is known about Finch’s life before the apocalypse and it is clear from the beginning that he is quite a broken man, however, he does share some stories with Jeff about his pre-apocalyptic life and his non-existent relationship with his father as their trust builds.

This film is basically a two-man movie, with the only actors being Hanks and Landry Jones, and the acting is incredible as Jeff begins to learn about trust, life and feelings through the man who created him and who he will ultimately take over from. This story is a father-son metaphor set in a hostile and cruel environment that is sweetened by humour and an upbeat soundtrack.

We’ve already seen Hanks in this type of character, which he plays so well in Castaway and The Terminal, but Landry Jones’ portrayal as Jeff is truly beautiful – particularly in comparison to his villainous character in Get Out.

At two hours long and although this movie doesn’t put you on the edge of your seat, except for maybe a couple of short scenes, the time flies by as the relationships grow between Finch, Jeff and Goodyear the dog.