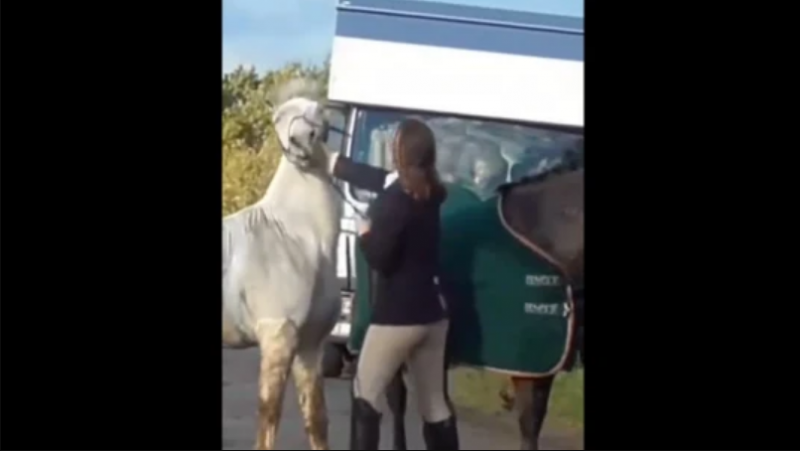 The primary school teacher who was caught punching and kicking a horse has been suspended and gone into hiding.

The primary school teacher who caused public outrage when she was caught punching and kicking a horse has been suspended and gone into hiding.

37-year-old huntswoman Sarah Moulds has allegedly gone into hiding after receiving death threats and has been suspended pending investigations into the footage.

Mowbray Education Trust said in a statement: “We can confirm that a member of staff has been suspended pending a formal investigation into an incident that occurred at the weekend.”

“We will not be making any further comment while the investigation is in progress.”

Sarah has also been removed from her role as a team organiser of the Pony Club. The group said: “We are aware of the video circulating showing unacceptable treatment of a pony and we wholeheartedly condemn this behaviour.”

Yesterday we filmed a @CottesmoreHunt rider kicking and punching her horse in the face.
Watched on by lackeys Will Ashmore and son Ed.
Violence running through their veins.@RSPCA_official pic.twitter.com/s37BlR4Hv3

“The welfare of horses and ponies is of the utmost importance to The Pony Club, therefore the lady in question has been removed from her voluntary position as a team organiser for a branch.”

A resident in her home village near Melton Mowbray who also rides with Sarah said: “She’s had to go away after receiving death threats and loads of vile abuse.”

“It’s awful and has got very much out of hand. She fears for her life.”

“She has young children and she is worried about them as well as herself.”

“She’s well known and respected in equestrian circles and her social media was bombarded with comments from very angry people after the video went viral and she’s now had to close it down.”

The footage was captured and shared on Saturday by the Hertfordshire Hunt Saboteurs. The anti-hunting group said it filmed the incident while observing the Cottesmore Hunt, which is based in Rutland, East Midlands.

The footage caused widespread outrage on social media, including from naturalist and presenter Chris Packham, who urged the RSPCA to “urgently investigate and definitively prosecute this appalling abuse.”

Zoologist and BBC Springwatch presenter Megan McCubbin said: “Yet another ugly side of an activity some call ‘sport.’”

The RSPCA described the footage as “really upsetting” and said: “We will always look into complaints made to us about animal welfare. We would urge anyone with first-hand information about this incident to contact us.”