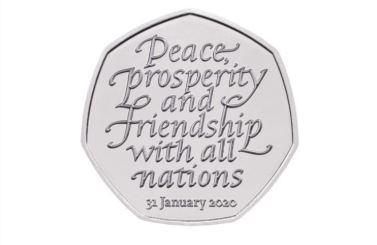 Rare Brexit 50p worth thousands on eBay. There are millions of these coins in circulation.

Many collectors are eager to get their hands on coins celebrating Britain leaving the EU. Some people are paying around 30,000 times the original value of rare coins.

Recently two rare 50p Brexit coins sold on eBay for £15,000. It is worth checking if you have one of these coins hidden away somewhere.

The coins were issued by the Royal Mint to mark Brexit. One side has the saying: “Peace, prosperity and friendship with all nations”. The other side features the Queen’s head.

10 million of the special coins were released. Collectors are thought to have captured many of these. This has meant that prices have risen.

The coins can be found on eBay for varying prices. Some sellers do not seem to know what they have and are selling them for a few pounds. Others are reportedly trying to hit an optimistic price of £50,000.

Alexandra Fiddons is an expert on coins. She previously commented to The Mirror: “The 50p was teased for a long while before the UK’s official exit from the European Union and when it was officially released into circulation, people were eager to snap them up for their own collections.

“This coin marks an incredibly significant moment in British history and it’s possible that people who aren’t usually interested in the hobby, may have been tempted to secure this 50p to commemorate the event forever.”

She went on to explain a little about rare coins and said: “Sometimes we see coins listed for prices well above their face value on the secondary market.

“Sometimes this is driven by low mintage figures, meaning there are fewer coins for people to collect, but it can also be driven by the popularity of the theme.”

Anyone looking to buy a coin online should ensure they do their due diligence. According to the Royal Mint: “If you are buying a coin on the secondary market we would recommend doing some research first, and there are a lot of useful resources on The Royal Mint’s website to help ensure collectors pay a fair price.”