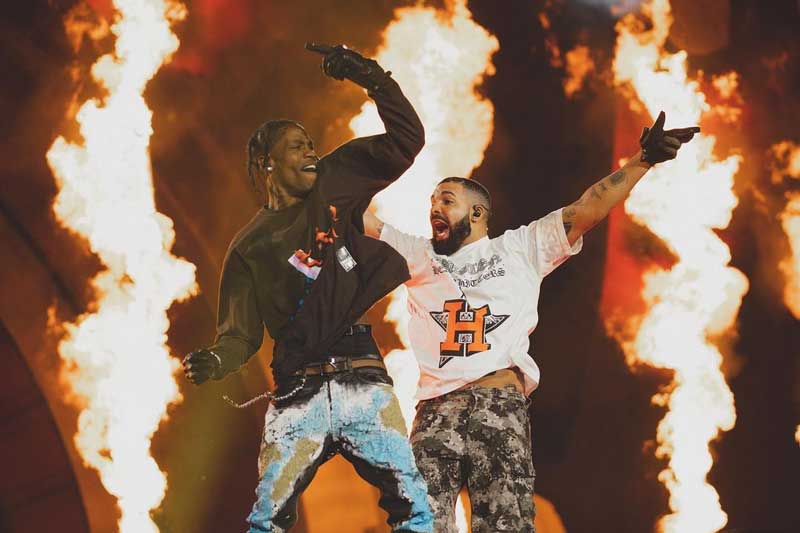 Sources claim that both Travis Scott and Drake were seen partying at Dave and Busters after the Astroworld festival tragedy.

Sources claim that both Travis Scott and Drake were seen partying at Dave and Busters after the Astroworld festival tragedy where at least eight people died.

Both rappers have come under fire after reports that they went to an after-party despite the incident.

Over 50,000 people attended the sold-out festival that reportedly did not have enough security where people were filmed jumping fences and turn styles avoiding metal detectors.

Audiences ended up compressed against fences and each other, causing suffocation, cardiac arrests and injuries.

Both of the rappers, who continued to perform despite allegedly knowing the crowds were being crushed, were seen at the after-party in Houston following the incident.

A source close to Travis and his team told TMZ: “Travis didn’t know the severity of the situation when he arrived at the party, as far as timing, this remains consistent with the fact that no one including the police had publicly confirmed the gravity of the events that had taken place.”

However, many videos have since come out on social media from people who attended the event, revealing the mishandling and dangers at the festival and apparently showing Travis being made aware of the stampede but continuing his set and even bringing Drake on as an unexpected guest.

While Travis and Drake continued to perform on stage, it’s alleged that “emergency vehicles arrived and responders attempted to rescue those in distress.”

Travis posted an emotional video on Saturday night addressing the tragedy, saying: “Anytime I could make out, you know, anything that’s going on, you know, I stop the show and, you know, help them get the help they need.”

He added that ‘he’s working with authorities to try to get to the bottom of this’ stating “I’m honestly just devastated, and I could never imagine anything like this happening.”

“My prayers go out to the families and all those impacted by what happened at Astroworld Festival.”

Drake said on Instagram yesterday, November 9: “I’ve spent the past few days trying to wrap my mind around this devastating tragedy.”

“I hate resorting to this platform to express an emotion as delicate as grief but this is where I find myself. My heart is broken for the families and friends of those who lost their lives and for anyone who is suffering.”

“I will continue to pray for all of them, and will be of service in any way I can, May God be with you all.”

Travis has since been hit with three lawsuits with one including Drake. The lawsuit states that Drake “helped incite the crowd” and caused the crush that resulted in the fatalities and injuries.

Travis has said he will refund all of the Astroworld 2021 tickets and plans to cover funeral costs for those who died at the festival.