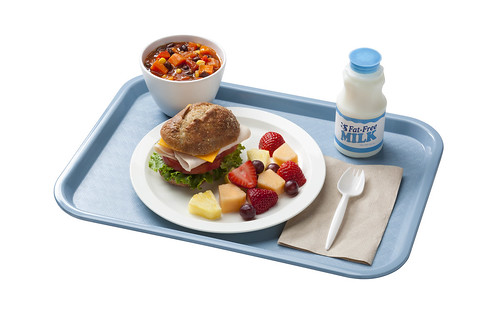 No school meals for pupils in debt warns school administration

School pupils in Gwynedd will not receive their school meals if their accounts are more than a penny in debt, they have been warned by their school head. The warning was issued by a letter sent by Neil Foden, the strategic head of Ysgol Dyffryn Nantlle in Penygroes, Gwynedd. In the communication, it has been outlined that the school cook has been told to refuse food to any pupils in debt. It states that they have been instructed to not give food to any child “if their debt has not been cleared, or, in the future, to children whose accounts do not have enough money to pay for lunch”.

There has been a deadline of November 19 set for parents to get their children’s accounts in order, to prevent a deficit in the school meal budget like the one recorded at the end of the previous half term. Mr Foden added: “Closer inspection revealed that this was because a handful of pupils had run up debts totalling more than £1,800. Unfortunately, this means that I have had to take the following steps. All debts over £10 will be transferred to the authority and parents will be invoiced by the council. All debts of over £0.01 will receive a message from the school to clear debts and credit the system by Friday, November 19th.”

Although Mr Foden apologised for the approach he said “ the scale of the default means that something clearly has to be done”. Social media has picked up on the letter and it has attracted criticism from parents around the country. One parent wrote: “Absolutely shocking. What the hell’s wrong with the system, the child might not know mam and dad are struggling to pay, it might be the only food that child eats that day.”

Another said that while parents accept bills need to be paid “imagine a child getting his food then being told you’re not eating today sorry, then having to leave”. The council at Gwynedd have informed parents who are having issues paying to contact the school to see if they are entitled to free school meals. Welsh Conservative Shadow Minister for Education, Laura Anne Jones MS said the decision was “very troubling and concerning” for pupils in debt. She said: “No child should be punished and denied food for being more than a penny in debt to the school canteen and it should be discussed with parents and dealt with through that avenue, not this heavy-handed approach. Gwynedd Council should immediately reverse this decision and work with parents to find a solution that keeps children fed whilst ensuring monies are collected.”