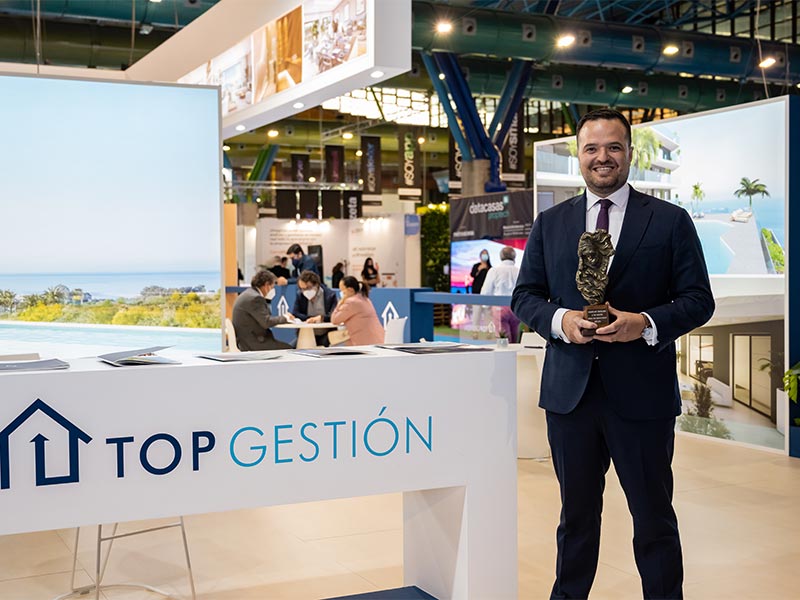 Oscar Presa, Managing Director of Top Gestión with the award for Business Recognition in the Real Estate Sector in Malaga.

The company was present at this edition of SIMED with an exclusive and large stand where it presented its main projects in the area.

Its commitment to this benchmark event is in line with the strong growth that the company has been experiencing in recent years and which currently has more than 1,000 homes being marketed in real estate development.

The developer Top Gestión was awarded with one of the Business Recognition Awards in the Real Estate Sector in Malaga, at the 17th edition of SIMED. Oscar Presa, general manager of the company, was in charge of collecting this recognition that every year MIC Insurance, a leading company in surety insurance in different European countries, awards from Antonio Morera Vallejo, president of the Morena & Vallejo Group.

This award highlights the company’s track record, its expansion, as well as its commitment and large investment to develop its developments on the Costa del Sol.

During the presentation ceremony, Oscar Presa, highlighted that “we are very happy that they recognise our great involvement in the area, in which we all have a common goal, to be part of the growth of this privileged region. A location in which we trust for all its characteristics, and in which we recently launched one of our biggest projects, Las Lomas del Higuerón. Through this project we are directly and indirectly generating employment for more than 1,500 local companies and businesses”. On the other hand, he stressed that their plans for the Costa del Sol go far beyond this great project, as they have shown in their stand throughout the fair.

Top Gestión was present at the 17th edition of SIMED with an exclusive and spacious 220 metre stand, where it presented its projects on the Costa del Sol and two of the company’s most important developments to date. One of them is Lomas del Higuerón, consisting of 1,200 luxury homes in the heart of El Higuerón (Fuengirola), with an investment of 600 million euros over the next few years, which will be marketed by Higuerón Resort and whose sales pace is well underway.

Another of its most important projects is The List Río Real, one of its most exclusive projects. It consists of 27 luxury villas located in one of the best areas of Marbella and within an urbanisation equipped with exclusive services, in a place from which to admire the beauty of the area, its sea and its mountains.

In addition to these two major projects, the company’s developments on the Costa del Sol were also presented, including the Montemar Collection, a development of 22 homes located near the Carihuela beach.Top Views, a project with 32 homes and panoramic views of the bay of Benalmádena. El Jardín del Perchel, a project of 40 homes located in the heart of Málaga and Icon Marina, a residential complex consisting of 87 homes located in Punta de la Mona, next to the exclusive Marina del Este marina, a protected area of Mediterranean forest and scrubland on Granada’s Costa Tropical in Almuñécar, La Herradura.

Top Gestión presented the advantages of Las Lomas del Higuerón in an Elevator Pitch at SIMED. Throughout the speech, the strategic location of this development has been highlighted, as it is located fifteen minutes from the centres of Malaga and Marbella, on the mountainside of Fuengirola, and with spectacular views of the Mediterranean and the Bay of Fuengirola. An area with more than 120,000 green areas, where more than 320 days of sunshine a year make it a reference point for activities all year round.

Top Gestión, together with Alza Obras y Servicios, is the second generation of the family group founded by Tomás Alarcón and has built more than 20,000 homes in the last 30 years. The company is experiencing strong growth in line with its strategic plan, and the attractiveness of its developments due to their privileged, strategic locations and differential luxury projects.

Top Gestión Madrid, S.L., is a company of recognised prestige, made up of highly qualified professionals with extensive experience in the real estate sector, having managed developments totalling some 3,000 homes. The company currently has around 1,000 homes under development and land in its portfolio for future developments for a further 3,000 homes, with a turnover in excess of 1,000 million euros. The developer is boosting its investment with new developments on the Costa del Sol, positioning itself in areas such as El Higuerón (Fuengirola), Torremolinos, Benalmádena and Marbella. In addition to the other locations where it operates, such as Ibiza, Granada, Seville, Madrid (Torrejón de Ardoz, Rivas, Cañaveral, Velilla de San Antonio, Alcalá de Henares and Barajas), Alicante, Murcia and Guadalajara.