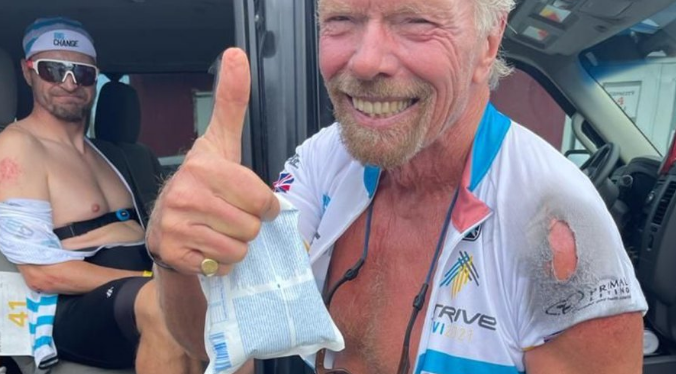 Sir Richard Branson has taken to social media to speak out about his “colossal cycling crash” during a charity race.

Billionaire Sir Richard Branson was participating in a charity sporting event, Strive BVI Challenge, in the largest of the British Virgin Islands, Tortola (east of Puerto Rico), when things took a turn for the worse and he endured a “colossal cycling crash” as he was about to fall off a cliff.

The cycling race, which is held annually and serves to support the NGO Big Change Charity – created by the tycoon’s children – almost cost him his life at 71 years of age if it were not for his helmet and a quick decision. Photographs uploaded to his Instagram account show the severity of his injuries.

Recovering well from a colossal cycling crash. Thankfully we’re ok, but some big bumps and bruises! Here’s how it happened: https://t.co/0bqPCaZXcD pic.twitter.com/493v2T4dT4

“I was going down a curve, with a huge cliff to my left,” explains Branson, when suddenly a truck appeared on the other side of the curve in the opposite direction.

“[I had] my partner Felix Stellmaszek in front of me, so I hit the brakes, but they didn’t respond,” he continues.

The tycoon explains that he “went faster and faster” and that his options were reduced to three: either he fell “off the cliff”, he collided “head-on against the truck” or he threw himself “against Felix” who cut off the path.

He says he should have, apparently, taken his hands off the brakes and tried again, but due to the adrenaline his ideas did not square and, although he warned his partner, he ended up colliding with him.

“We both fell off the bikes and our bodies and our heads hit the asphalt directly, it is not the first time that the helmet has saved our lives. We were left lying on the ground while the team was surrounding us,” recalls Branson.

“I stayed still, hoping not to have broken my back or to have been paralysed. But little by little I began to move my legs and I was relieved to see that they responded.”

His injuries include “serious cuts and bruises” and “an unusually large lump on the hip and a huge bruise on the leg.”

His partner Felix has joked: “No one had ever thrown me off my bike apologising before; it was very polite of him, I must say.”

Branson has uploaded a video in which he describes the accident as “colossal.”

“Fortunately we are well,” he concluded.