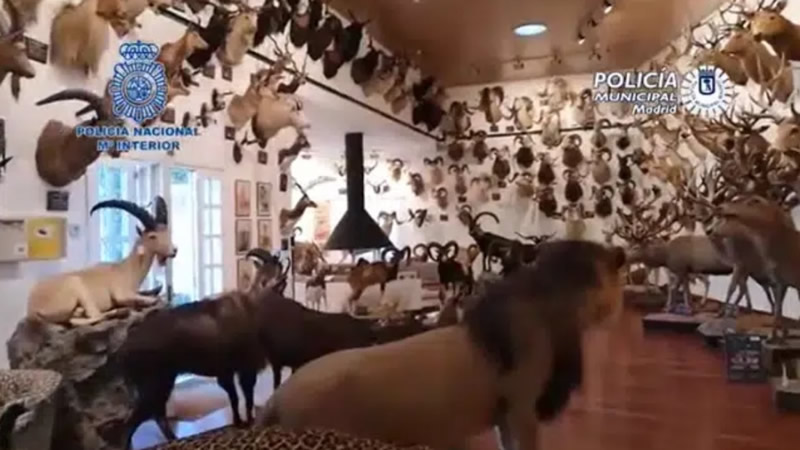 National Police officers, in collaboration with the Municipal Police of Madrid and the CITES Service (Convention on International Trade in Endangered Species of Wild Fauna and Flora) carried out a joint operation in the city on Thursday, November 11.

As reported by the police in a press release, during this operation, the investigators seized 49 stuffed animals along with 132 pieces of carved ivory from elephant’s tusks. Among the species of animals discovered were lynx, crocodiles, bears, wolves, leopards, and primates. Many of these creatures are included in the list of protected species by the International Convention on Protected Species.

The raid was concentrated on a farm in La Moraleja, in Madrid, a property owned by an individual who is under investigation for the continued crime of trafficking protected species.

According to sources of the investigation, he is Marcial Gomez Sequeira, former president of Sanitas. Sequira has been convicted by the Supreme Court for two crimes against the Public Treasury. He also previously tried unsuccessfully for his animals to be exhibited in a museum in the Badajoz municipality of Olivenza.

The police launched their investigation in November 2019, shortly after El Pais published a report on Gomez Sequeira’s plans. They wrote about how he intended to create a museum with a collection of naturalised animals of various species, some of them apparently protected by the CITES Convention.

The Environment Group of the National Police initiated the steps in order to prove the possible commission of a continuing crime against flora and fauna or even one of smuggling. Firstly, the researchers contacted the CITES administrative authority in Geneva to determine whether there could be any animals included among the species of special protection.

This point was confirmed by said authority, which determined that a high number of protected species were observed according to the different CITES Appendices and Regulation 338/97 of the Commission of the European Union. It also pointed out that the investigated person lacked many of the mandatory permits and certificates for his possession and importation of these creatures into the national territory.

All the seized specimens were on display in two pavilions located on the farm where investigated was living. Conducting their search of this farm, the officers intervened the aforementioned pieces, sealed and in their place of exhibition, due to their high fragility.

For a year, the investigated provided documentation in order to prove the legal origin of the intervened effects. In this period, he claimed that many of his specimens had been acquired prior to the date of entry into force of the CITES Convention in Spain.

Those specimens for which no valid documentation could be presented were removed on October 14, with prior judicial authorization. They were transferred to warehouses authorised by the National Museum of Natural Sciences and the CITES administrative authority.