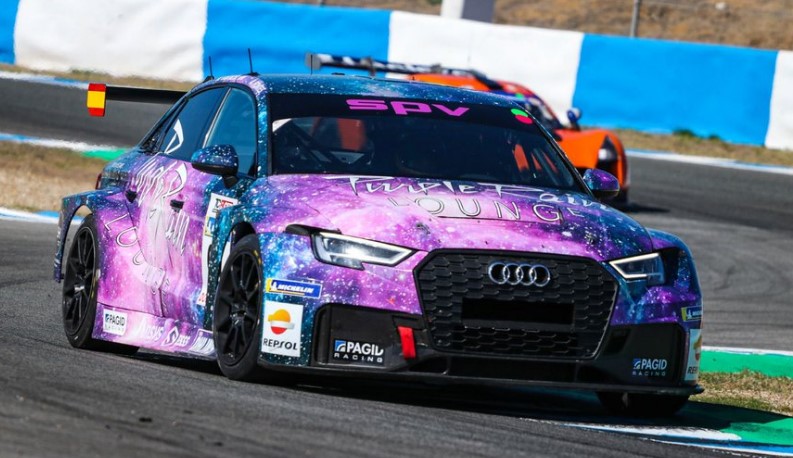 Alvaro Fontes won his third Spanish championship title this weekend at Circuit de Barcelona-Catalunya. The Malaga-born driver, who already won the Spanish GT Championship in 2012, and the TCR category in the Spanish Endurance Championship in 2015, continues to build his legendary status on Spanish circuits.
Together with his co-pilot, Dutchman Mirco van Nostrum, Fontes won the TCR category of the Spanish Endurance Championship on Sunday, November 14, which concluded its 2021 season in Montmelo in Catalonia.
Fontes and van Nostrum, were a perfect match at the wheel of the Audi RS3 LMS of SPV Racing in the striking sponsorship colours of the Purple Rain Lounge, rounding off their superb racing season with a title.
During the practice sessions on Friday, Fontes made his first appearance on the track, with a time of 1m58.532s, taking third place among the TCR cars. Then again, in free practice on Saturday, Fontes set a time of 1m58.048s in the Audi, which gave him 2nd place in the TCR, setting him up nicely for Sunday.
In the afternoon, Fontes and van Nostrum set an average time of 1m58.282s, which gave them third position in their category. Today’s two-hour race got underway at 10am, in which Fontes provided a sensational first relay.

Taking the lead on the fourth lap, Fontes controlled the race

On the first lap, the Malaga-born rider was already up into second place, but on the fourth lap, he overtook Amalia Vinyes, and gained the lead. From then on, Fontes totally controlled the race, staying ahead of Santi Concepcion Jr, who even went off the track in his effort to chase down both the Andalucian, and the Andorran driver, Vinyes.
Fontes made his stop after a marathon 31 laps, with a comfortable lead. Because of the time handicap due to the Jerez results, it meant that van Nostrum rejoined the track in second position. From there to the end of the race, the Dutchman drove very solid lap times, finally crossing the finish line in second position, just two seconds behind the winner, Concepcion Jr.
“I am very happy to have won my third title in a Spanish championship, and of course to have contributed to my teammate Mirco, and SPV Racing to become champions. I think I did a good first relay, which was my job as the most experienced driver. Mirco rounded off the task with a second place that tastes like a victory because of the time handicap we had”, explained Fontes.
He added, “I want to dedicate this title to our sponsors, especially Purple Rain Lounge, and friends, for their support. The Audi was never the best car, but we were very consistent, and the work of the SPV Racing engineers and mechanics was the key to our success”, as reported by diariosur.es.