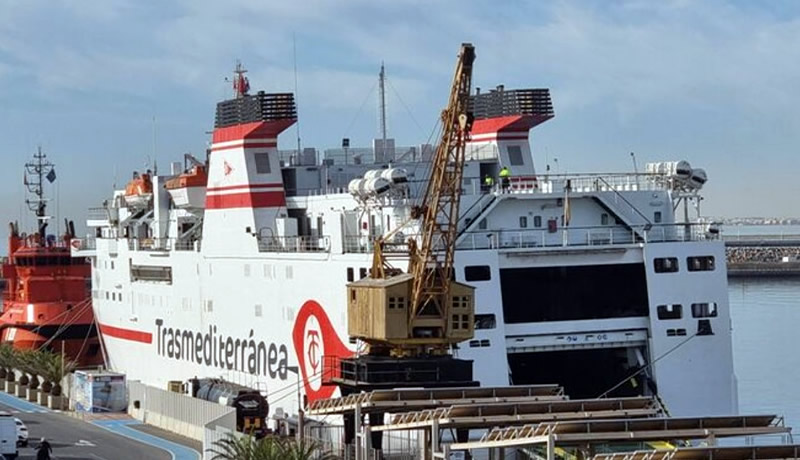 After a delay of twenty months due to the pandemic, the Trasmediterranea shipping company has restored passenger traffic between the Port of Almeria and the Algerian ports of Oran and Ghazaouet.

The honour of the first renewed crossing went to the ‘Las Palmas de Gran Canaria’ ferry. It departed at 11pm from Almeria port yesterday, Saturday, November 13, headed to Ghazaouet, arriving back at 11pm on Sunday 14.

On Tuesday 16, the boat will cross to Oran, departing at 11pm, returning to the port of Almeria at 7am on Thursday 18. Then again, on Saturday 20, and Sunday 21, the Trasmediterranea ship will return to the Almeria-Ghazaouet-Almeria service, both at 11pm.

Jesus Caicedo, the president of the Almería Port Authority (APA), expressed his satisfaction with the resumption of passenger trips between Almeria and the Algerian ports, and the return to normality.

“The re-establishment of passenger traffic with Algeria is great news for the Port, for the Port Community, and for Almeria. In addition to the social importance of resuming the movement of travellers between the two shores of the Mediterranean, it will also allow the recovery of economic activity and employment”, he said.

Mr Caicedo trusts that Morocco will also reopen its borders with Spain soon, and that the maritime passenger service between the Port of Almeria with the said country can also be re-established, both through the Port of Nador and the Port of Melilla.

He added that he hopes “next summer, Operation Paso del Estrecho can be carried out normally, which accounts for more than 60 per cent of the Port’s passenger movement”.

Last year, almost 13,000 passengers travelled between Almeria and the Algerian ports, compared to 111,000 in 2019. This was the result of Algeria closing its borders to stop the spread of the pandemic.

Until the first week of November 2021, only 300 travellers have passed between Almeria and the ports of Oran and Ghazaouet. These people were allowed to travel for exceptional reasons, and with special permits, as the borders of the Maghreb country have remained closed until now, as reported by diariodealmeria.es.