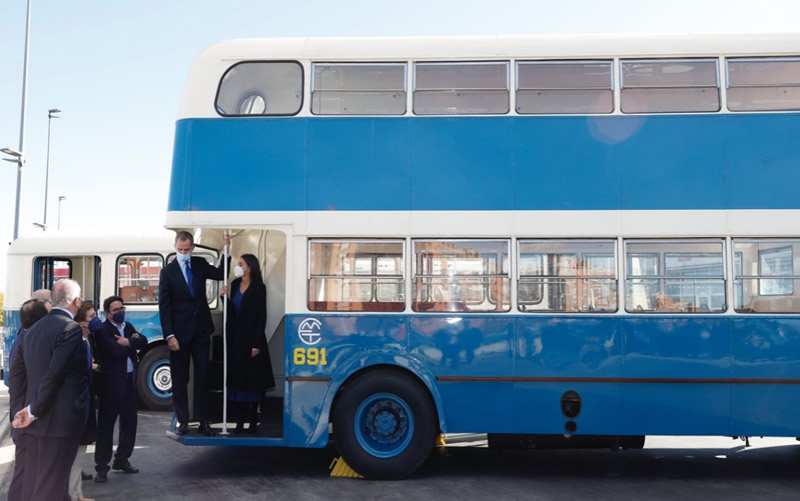 King Felipe and Doña Letizia caused quite a stir in Madrid today, Monday, November 15. The royal couple is normally seen arriving at public events in a chauffer-driven car, or by helicopter, but today, they rode a public bus.

This occasion was to celebrate the 75th anniversary of the Municipal Transport Company of the capital (EMT), where they presided over the ceremony. Just like every other passenger, the couple waited in the queue patiently on Calle Alcala, very close to the Plaza de la Cibeles, for their 100 per cent electric bus to arrive.

This EMT vehicle is totally ecological, emitting zero emissions into the atmosphere. To the amazement of fellow passengers, the couple was issued with their tickets for the ride, but the cost was covered by EMT of course. Their bus ride was on the line 001 service, heading to Atocha station.

Riding a bus in the company of Don Felipe and Doña Letizia has generated a great stir among many locals and tourists who were in the city centre. These people surely had to look twice to realise it really was then waiting for the public transport.

During the wait at the stop, Doña Letizia even chatted with some of the travellers who were also waiting to get on the bus. Once on board, one lucky lady was given the opportunity to have her photograph taken with the royal couple.

Last Saturday had been opera night, where they attended the premiere of Partenope, along with many well-known faces. Tomorrow, Tuesday 16, the royal couple will play hosts to Sergio Mattarella, the president of the Italian republic, on his official visit to Spain, as reported by hola.com.