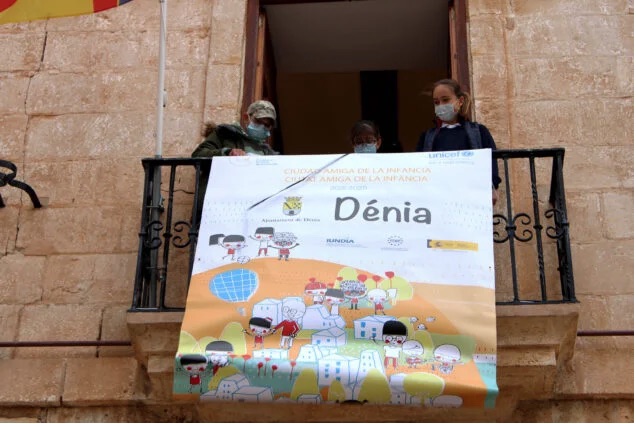 The seal was received by two representatives of the Local Council for Childhood and Adolescence (CLIA), Ainoa Aleksandrova and Kinan Zniterh. The event was held in the Plenary Hall of the Dénia City Council with the participation of the mayor of the city, Vicent Grimalt , the Councilor for Equality and Inclusive Policies, Melani Ivars, and in the presence of other members of the CLIA and representatives of the municipal corporation
Guilklermo congratulated the members of CLIA for their work to achieve recognition as a Child Friendly City telling them that you and by extension everyone in the city that “your voice and special efforts are deeply valuable in build municipalities in which we can live happily. In his opinion,” he added, “your efforts are both wise and generous and is important in helping adults to make decisions.” To end his speech, he thanked the City Council of Dénia, both the political leaders and the teams of workers for “the commitment to support children.”
Speaking on behalf of the CLIA “and of all the children and adolescents of Dénia”, Kinan Zniterh, reflected on the process that has culminated in obtaining the Child Friendly City seal. He recalled that “Dénia thought that childhood was not only the future, but that it could be the present, therefore, the first thing that was done was to promote the creation of the Counsel, which met for the first time in December 2019. Today, the objective has been achieved and we are now a Child Friendly City ”, he concluded to loud applause from the room.
To raise awareness of the Child Friendly City award, a banner is on been display on the façade of the town hall. The banner will also be illuminated with blue light at night.
The mayor, Vicent Grimalt, referring to the achievements of the young activist Greta Thunberg spoke of the transforming power of the children and adolescents of Dénia. He believes that they can achieve “from a participatory body such as the CLIA, many and very important transformations that can make the city a better place ”. The objective is in the words of the mayor, “a Dénia that listens to the boys and girls who also live in this city and who have the right to enjoy it, a city that is adapted to their needs and their right to a beautiful, safe and sustainable future in this municipality. You are, therefore, a great hope for the future; the guarantee that Dénia will be better when you are older ”.
The event where UNICEF accredits Dénia as a child friendly city began a week full of activities that, as Councilor Melani Ivars has said, “includes many of the concerns that the protagonists, the youngest of the city, have sent us and who wants, in addition to ‘offering them a complete program, make them visible as a group that also has the right to decide which city they want, to express needs and preferences and to be heard ‘.
Ivars stressed that the most important thing about this week “is that it has been designed according to the proposals made by the children of Dénia themselves through the Council for Children and Adolescents.”