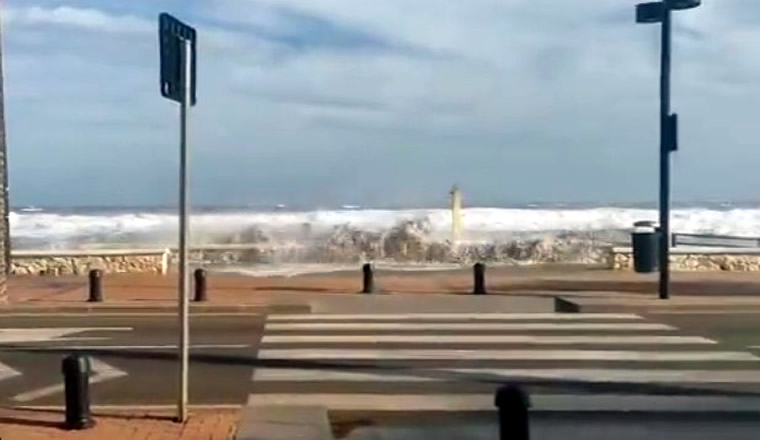 The Costa del Sol fell victim to the storm that came in from the east on Friday, November 19. Malaga capital had its fair share of incidents, with fire crews and emergency services active and responding to calls from around 8.30am.

Among the municipalities, Fuengirola was one of the most badly affected. The Local Police Coordination Centre was dealing non-stop with calls, and received about 50 calls by 4pm. A beach bar located on the Paseo Maritimo Rey de España suffered serious damage, with the collapse of the roof and part of its structure.

On the same seafront, the roof of a bar, a telephone pole, and a tree also fell. Several of the town’s streets suffered problems with their Christmas lighting. Operatives had to solve incidents involving fallen or dropping lights in Calles Lamo, Mayor Clemente Diaz Ruiz, and Jacinto Benavente. In the fairground, the branch of a tree fell on top of a vehicle.

Various coastal areas of Marbella experienced problems. La Venus being the one that suffered the most. Angeles Muñoz, the mayor, reported that there had been “destruction in beach bars, on the coastal path, sanitation, and elements such as assisted bathing”.

The beaches of Estepona have been badly damaged, registering a loss of sand that has exposed some areas of stones. Here, the town council pointed out that “some beach modules have been affected”.

Torremolinos town hall reported “some broken tree branches, but they have been acted upon without any problem”, while in Mijas there were reports of “some actions of little relevance, related to falling branches, awnings, pergolas, etc”, that did not have serious repercussions.

In the Axarquia region, the easterly winds again caused damage, although no major incidents were reported. Beaches in El Morche, or Ferrara in Torrox, plus those in the west of Torre del Mar are already used to this type of weather and the way it affects them. Fishermen in Caleta de Velez had secured their fleet since Thursday 18, in preparation for the high winds.
A yellow alert had been in place for the interior, where there was relatively little reported, with the winds not as bad as had been expected. Ronda had closed all of its parks off as a precaution, but the day went without any big incidents, as reported by malagahoy.es.