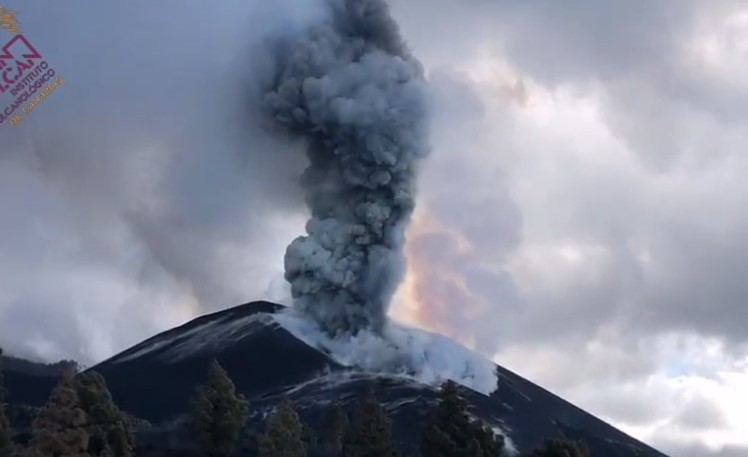 Toxic gases in the danger zone around La Palma volcano could kill a person in minutes image: [email protected]

The Cumbre Vieja volcano on La Palma overflowed again late last night, Thursday, November 18. It has since stopped overflowing but has this has ultimately caused an increase in the rate of lava emission, which is reported to be very fluid.

As a result, there are currently three active fronts of lava flowing out. One goes from Montaña Rajada to the north of Montaña Cogote – colada 11. Another continues to feed the lava deltas, and the third, the most intense, runs between streams 4 and 7.

Ruben Fernandez, the deputy director of Pevolca, held a press conference today, Friday 19, along with Carmen Lopez, the IGN volcanologist. They pointed out that the new stream can affect homes and farms, but that it has slowed to around 20 metres per hour.

Ms Lopez also spoke about the volcanic plume, which has now reached an altitude of around 3,500 metres. This accumulation is currently blowing towards the east and southeast, which will probably affect aviation on Saturday, or at least for the next 48 hours.

The IGN expert explained that seismicity at intermediate levels continues to decrease, and remains at high depths. A team is constantly monitoring for movements, with an earthquake measuring 5.1 magnitude being registered at 1.08am this Friday in Mazo, the strongest shake yet.

Sulphur dioxide (SO2) is still being emitted but continues its downward trend, with a range between 17,000 and 26,000 tons per day. Carbon dioxide (CO2), on the other hand, continues to rise, with between 2,400 and 2,600 tons per day. As for the air quality, it is good or reasonably good in all the stations of the island, as reported by 20minutos.es.