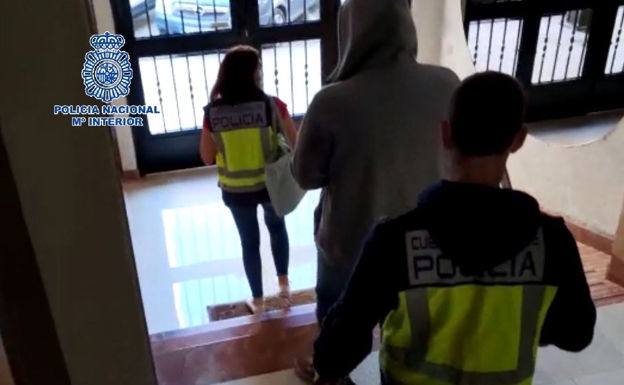 The Malaga paedophile used social media to present himself to his young, male victims as a 15-year-old girl. However, what was behind this fake profile was none other than a sexual predator who requested sexual images and videos from the minors he contacted. This is how investigators from the National Police Corps (CNP) believe a young paedophile who has been arrested following a case of abuse in Marbella acted. Thousands of child pornography files have been seized from the arrested man.

The investigation began when a woman went to the police station in Marbella to report an offence of sexual abuse of a minor. She told the officers that her son had been exchanging photos and videos of sexual content via various instant messaging applications with an unknown person.
The members of the Family and Women’s Services Unit (UFAM) immediately set to work to clarify the facts. In this way they found out that the alleged perpetrator was posing as a 15-year-old girl, duping the victim to continuously and insistently ask them for photos and videos of sexual content.

The intense and careful investigation, carried out with the collaboration of the Cybercrime Group of the Malaga Provincial Police Station, led to the identification and location of the perpetrator, a man, aged 27. The investigation, in fact, led the officers from Malaga to Valencia, where the suspect lived.
On November 11, the national police prepared a joint operation and proceeded to arrest the Malaga paedophile. They also carried out a search of his home, where they found more than 4,000 child pornography files when they checked the arrested man’s electronic and computer devices. These included videos of adults having sex with minors.

Given the huge amount of information seized, as well as the national and international dissemination of the files, investigators believe that they were dealing with a paedophile network of international scope. For this reason, the Corps has informed that the investigation is still open.
The Malaga paedophile was arrested and charged with the alleged crimes of sexual abuse of a minor and corruption of minors. After being brought before the court, the examining magistrate has sent him to prison.