Scotland shaken by another earthquake 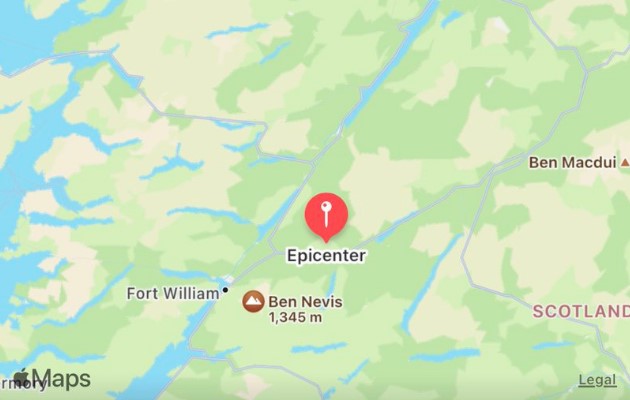 Scotland shaken by another earthquake

Another earthquake has shaken Scotland on Friday evening, November 19. Measuring 2.1 magnitude, it was not as strong as the 3.1 tremor that occurred last Tuesday 15.

The British Geological Survey reported the quake being recorded at around 9.30pm, with its epicentre near the small Highlands village of Roybridge. It was registered at a depth of 7.5km. This same village was the epicentre of the second movement of 1.6 last Tuesday 15, just one hour after the main quake.

“A small number of reports have been received by members of the public in the Roybridge area indicating they felt this event”, said a spokesperson for The British Geological Survey.

According to The Sun, locals in the neighbouring areas of Spean, Bohenie and Roughburn, reported hearing “big banging” sounds. Taking to social media, residents spoke of their experiences, “Another earthquake in Roybridge???”, posted one user. While another wrote, “I just heard a big banging in Spean, I thought it was someone’s bins or something”.

Speaking with BBC Radio’s Good Morning Scotland programme, Rosemary Neagle, explained, “It kept on intensifying, and the house vibrated. It rumbled on for about 10 seconds afterwards, so it was quite frightening. I have experienced them before here but never to that extent. The house has never shaken like that in the past”.

Rosemary lives on a farm in Kilmartin Glen near Lochgilphead, and likened the noise of the quake to an explosion taking place in one of her sheds.

Although Britain is not known for its earthquakes – most are of a low magnitude and go unnoticed – but between 200 and 300 occur annually. Occasionally, as with the tremors this week in Scotland, they can be over 2.0, and felt in the immediate vicinity.

Scotland’s worst earthquake, measuring a whopping 5.2 magnitude on the Richter Scale, took place in 1880, near Loch Awe. Colchester in Essex was the epicentre in 1884 of the most-damaging tremor to hit the UK. During this seismic activity, the ground shook so much that around 1,200 properties suffered structural damage, with walls and chimneys collapsing.