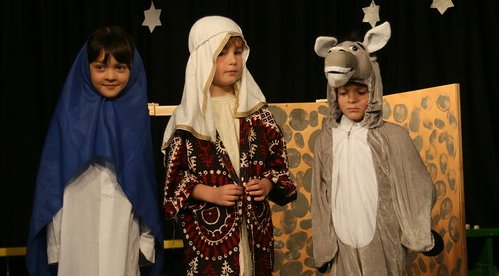 Schools have been forced to cancel Christmas lunches and nativity plays will have no audiences as Christmas cancelled for school kids a second year running.

Parents in parts of the UK have been told they will not be allowed to come and watch their children star in Christmas shows again this year due to the Covid -19 pandemic. Also, due to staffing shortages mean that some schools will not be able to hold Christmas lunches.

Last year, much of Christmas was effectively cancelled as in tier 4 restrictions no one was allowed to travel outside of their own area unless it was for childcare or support bubbles. This year so far the Christmas cancellations in schools have come from Scotland and Wales, although with rates on the rise across the whole of the UK, there is concern they will spread to England and Northern Ireland as well.

The Welsh Government have stuck to their guns and have warned schools to follow advice based on Covid rates no matter how the parents feel about them. In Carmarthenshire, the council is “strongly discouraging” allowing parents to come into schools for performances. Other councils are suggesting that concerts be held online again where possible.

Bridgend council has blamed limited staffing for the lack of Christmas lunches planned for this year. Parents have been left furious at the double standards in the rules, with one mum angry that people are allowed to go to cinemas and sports games but not to school concerts.

Faye Mortlock spoke to The Mirror and told them her kids are upset to see Christmas cancelled again in this way. She said: “My daughter is heartbroken I can’t watch again, it’s her last infant concert. Another childhood rite of passage that she has missed. I’m so sad though because our school was always so proactive and keen for the return to normal prior to the summer.”