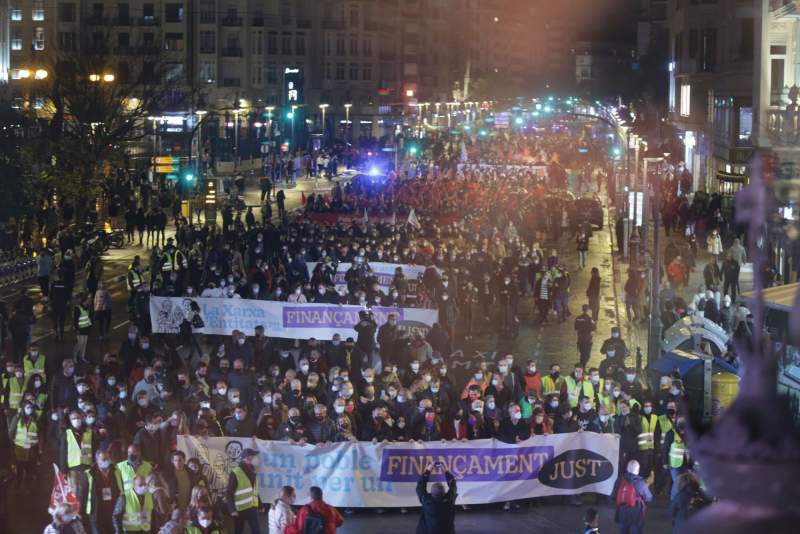 Despite the threat of heavy rain, Valencians came out in their thousands to demonstrate, to demand fair government funding for the province. The demonstration, which was attended by people and organisations from both the left and right, was an effort to increase pressure on the national government to address the disparity in funding of the region that they say is underfunded relative to the other 16 regions
The disparity in the funding is fully accepted by the Ministry of Finance, however there has been little effort to rectify the situation. According to experts Valencia receives around 1,300 million euros less than the average received by the regions. For every citizen that is 215 euros less that the national average and 703 less than the best funded region.
Action is needed not words
All parties in the region, with the exception of the extreme right participated in the demand for fair government funding including Corts, PSPV, PP, Compromís, Ciudadanos and Unides Podem. Unusually for such demonstrations, local business and trade unions (CC OO and UGT) also joined the demonstration as did many local charities and citizens. Similar demonstrations were also held in Alicante and Castellon.
They were all of one voice demanding that the government stop talking and start doing, taking action to begin implementing a fairer funding regime.
For more than an hour
The demonstrators marched for more than an hour through the city centre. Throughout the march local citizens applauded the demonstrators, showing their support for the many banners and the messages they carried.
Reform has been postponed
The demand for fair government funding has been on the agenda for some time with the current funding model havingw3 expired in 2014. Since then the Valencian government have made it a priority to get a fairer distribution. The Rajoy government avoided the issue and since then elections and the pandemic have been given as reasons for failing the address the funding model. Critis however say that the government have never approached the issue decisively although the Sanchez government has given some indications that they will. Change however requires abroad consensus and the agreement of the two major parties, PSPV and PP, which is why the unified call in Valencia was even more important. .
Government gestures
The funding issue has become a national issue and is now subject to more open debate than before. Importantly the current Finance Minister, María Jesús Montero, has spoken about the issue in Congress.
Valencians are hoping that the issue of fair funding for the province will following the large demonstrations, now be looked at sooner and more decisively.