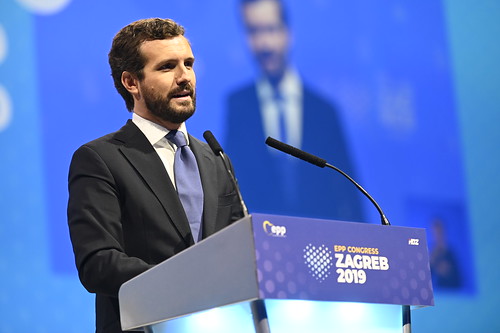 Spain’s right-wing People’s Party (PP) has had to issue a statement confirming its condemnation of the Franco regime after the party leader attended a Franco mass. The visit to a church service in which prayers were said for the soul of the dictator on the 46th anniversary of his death is said to have been inadvertent.

Pablo Casado has been leader of the PP since July 2018 and was seen attending the mass in Granada on Saturday 20 November. According to the PP, Casado attended this particular church as he was staying with his family nearby. They are in Andalusia for a party conference and he feared work commitments would prevent him from making church the following day.

“At no point was [Casado] aware that prayers would be said for the dictator,” the PP said in a statement on Monday. “In fact, there was no express mention of Franco in the homily.” According to the party, Casado was only made aware the following day that the prayers read for ‘Francisco’ during the service related to Franco.

“He never knew that they were going to pray for Franco,” the statement said, adding: “The People’s party has always condemned the Franco dictatorship.”

The Spanish Socialist Worker’s Party (PSOE) which leads the coalition government in the country described the fact the PP party leader attended a Franco mass as “a totally irresponsible insult”, and demanded an explanation.

Pablo Echenique, a spokesperson for Unidas Podemos, the PSOE’s junior coalition partners, also said an explanation needed to be made. “Last Saturday there were 10 masses for Franco and there are about 23,000 churches,” Echenique said in a tweet. “The probability of randomly stumbling into one is 0.05% – yet, according to sources from his own PP, Pablo Casado managed it.”

The Francisco Franco National Foundation – which exists to preserve and promote the dictator’s legacy – said that while it had not “expressly” invited Casado to the mass, it was pleased he had been there.

“We thank Mr Casado and his family, and the rest of those who attended the mass, for the prayer for the soul of an exemplary Christian such as Francisco Franco Bahamonde.”