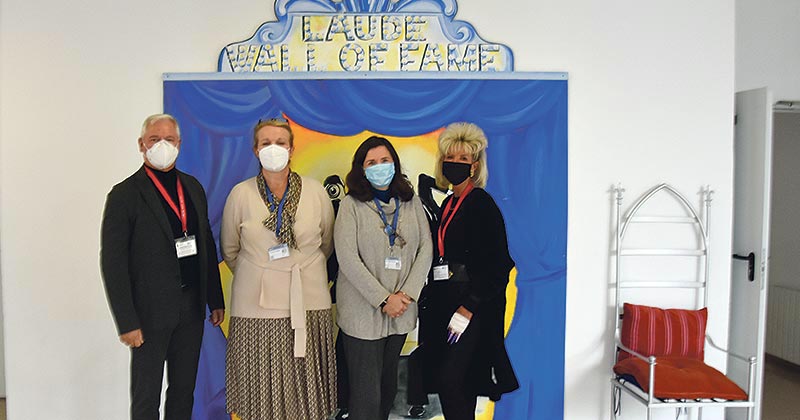 Euro Weekly News CEO Michel Euesden paid a visit to Laude San Pedro to meet the Principal, Amanda Hughes, and other members of the school team, to watch this school at work shaping the next generation of high flyers on the Costa del Sol.

Amanda explained that her main goal is to produce aspirational children who want to help others, and she spoke about the many reasons behind Laude San Pedro’s success.  She said that it was the school’s emphasis on academic excellence as well as its personalised teaching that had made Laude San Pedro so successful.

This international school, with all teaching in English and additional languages such as French, German, Chinese and compulsory Spanish studies, has for the last six years featured on El Mundo’s prestigious top 30 international schools in Spain rankings.

The school accepts children aged three to 18 years old, delivering the British National Curriculum and there is the option to move into the Spanish education system on campus, when the children reach Year 8. The school’s focus is on meeting the needs of each student, and encouraging them to achieve their personal best academically.  Its high standards of education have paid off, with 60 per cent of A Level students achieving grades A and A* in August 2021. 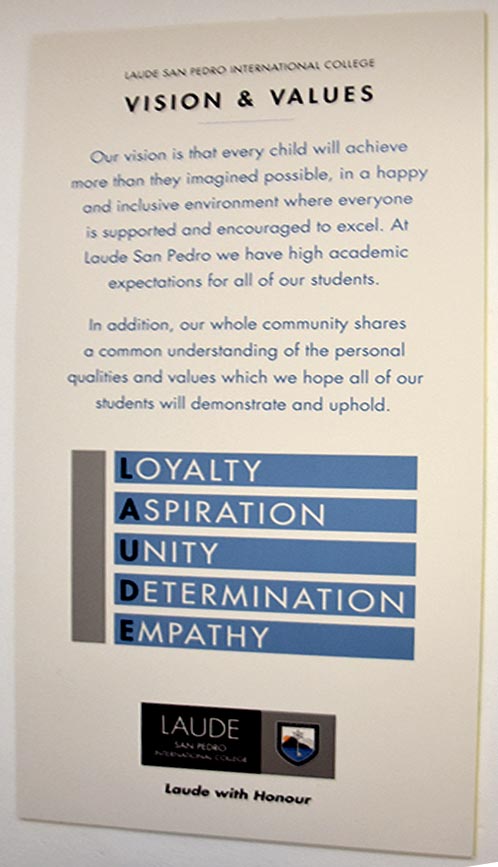 With 880 students across the school taught in classes of less than 25, Laude San Pedro not only offers its children an outstanding education, but its wide range of facilities mean they are also offered an array of additional activities, allowing them to experience success in multiple areas. From music classes to sports clubs, eco-committee to gardening society, and even a school council, Laude San Pedro encourages its children to develop the leadership and 21st century skills that are essential for later life.

Beyond this academic and extra-curricular education, the school frames its high expectations around personal values that will equip the children for a happy and successful life that sets Laude San Pedro apart.  With a school vision that teaches loyalty, aspiration, unity, determination, and empathy, Laude’s ethos is based on personal achievement, respect for others, and the importance of helping those around them, and students are encouraged to participate in helping out in the local community.

This ethos also extends to Laude’s pastoral care. The whole school celebrated World Mental Health Day recently, with a programme of activities available to both staff and pupils, ensuring that children are given personalised attention and their well-being is put first at all times.

Amanda spoke of her joy at leading the school, saying, “I learn as much from the students each day as they learn from me.”  She added that the school’s ethos and academic excellence produces high achieving students, including 16-year-old Martina, a published author who was awarded Marbella Council’s prestigious ‘Con M de Mujer’ award.  The children go on to study at universities around the world and they do not see a barrier to learning.

Amanda also spoke to the EWN about the school during the pandemic, explaining that it is now beginning to host many of its successful events again, including its Community Clean-up, which sees students and staff get involved in helping to improve the local area.  She said: “These events are very popular and before Covid would attract around 100 people.” Amanda said that the school now plans to host additional events, following Covid protocols, to allow children to give back to the community on the Costa del Sol, with a Christmas fair planned for December 11, raising funds for charity.

Laude San Pedro is part of the International Schools Partnership (ISP), an education group with 53 schools and more than 45,000 students worldwide, who are offered a global education.

Amanda, who has been principal at the school for three years, also explained the importance of belonging to the International Schools Partnership (ISP) for the students, saying that it offered them the chance to learn with students across the world, even taking part in cultural exchanges and international competitions. She added that this international approach helped the school to build a student body from 50 nationalities.

Laude San Pedro’s sister schools, Palacio de Granda in Asturias and Lady Elizabeth in Benissa, are also able to offer boarding facilities to those students from international families who may live in other countries. All of the ISP schools share a focus on learning and how they can constantly get better.