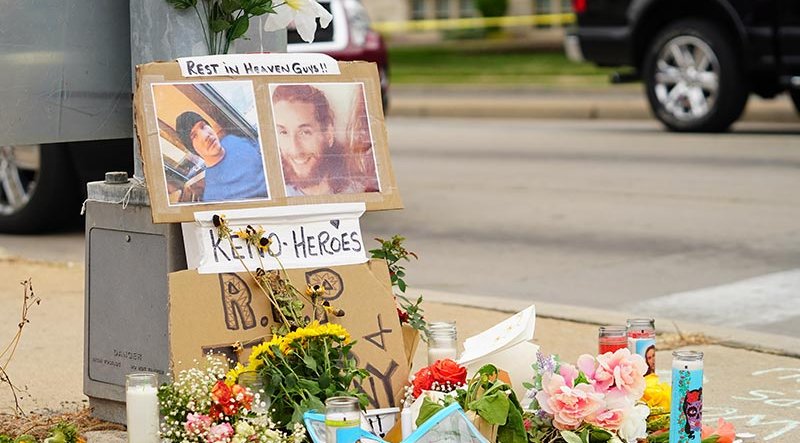 “Justice! Justice!” Right-wingers will cry out and celebrate as this week in America, 17-year-old Kyle Rittenhouse was acquitted of murder. He fatally shot two people, injured another, and attempted to shoot two more. His argument was self-defence, made after a person hit him with a skateboard while trying to disarm him.

Rittenhouse was carrying an AR-15 rifle that he had brought from his home, a 30-minute drive away from where he was attending the scene of violent protests, to ‘defend property’, according to his defence. He was also pretending to be an EMT, an American paramedic. He has no medical certification.

The protests had begun because a man, Jacob Blake, was shot by a police officer. Blake was walking to his car, in which his three children were sitting, and from which they saw the whole event unfold. Blake was shot in the back and is now paralysed from the waist down. The police officer was not charged. His plea was self-defence.

Kyle Rittenhouse is the same age as Trayvon Martin. Martin was walking home from the shops with a bag of skittles in his hand. He was shot and killed by a neighbourhood watch zealot, who was charged with second-degree murder and then acquitted at trial. His plea was self-defence. If there seems to be a theme running through these stories, there is: plead self-defence and the murder charge goes away. But hold on, this cheat code to life does not apply to everybody. Women who kill their abusive partners in self-defence situations spend on average 60 per cent longer in prison than the men who kill the partners they are abusing. One of the main factors in this type of sentencing according to psychologists, is the widespread societal belief that women are not meant to be violent, therefore these accused women must be in the wrong.

The ‘get out of jail free’ card also misses out black people. Studies have shown that when the same actions are carried out by people of different races, the actions of the black participant are recorded as being more violent. In a particular study conducted at Irvine University, when two participants pushed each other after a heated argument, 75 per cent of people classed the black participant’s action as ‘violent’, versus just 17 per cent when the white participant did the same thing.

These beliefs are widely held and not spoken about enough. They seep into all facets of our lives and skew the system of so-called justice in the favour of certain people. Social context plays a huge role in how we judge a situation. For example, 92 per cent of judges in the UK are white. Less than a fifth are women. These numbers matter because if a person cannot relate to you, they are more likely to judge your actions harshly.

Unsurprisingly, there have been protests since the Rittenhouse verdict. A system cannot be just, if the same level of justice is not given to all.