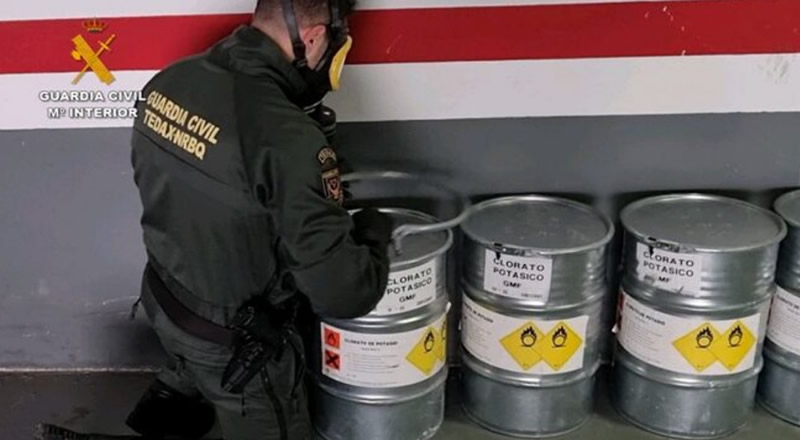 Guardia Civil officers have seized a total of 350 kilos of explosive precursors from the underground parking lot of a residential building in the Tarragona municipality of Reus. This is one of the largest hauls of this substance ever made in Spain, and had been illegally advertised for sale on the internet.

In a statement from the force, they revealed that 350 kilos of potassium chlorate were discovered, in seven large 50-kilo drums. They had been stored in the community parking area of the block the seller lived in. This material apparently came from an old primer manufacturing company, closed years ago. The seller has been administratively denounced for a very serious violation of the Precursors Law.

As highlighted by the Guardia Civil, this individual generated “a considerable risk for his neighbours, as the place lacked any space. type of security measure”. Potassium chlorate is a precursor substance that is used as a base for the manufacture of numerous explosives. It contains chloratite, which is widely used by various terrorist gangs as it is relatively easy to make at home.

An investigation had been launched last September after the Guardia Civil detected an attempt to sell this substance illegally on the internet. These explosive precursor chemicals have been restricted and regulated for years in the EU and in Spain to prevent their use for terrorist or criminal purposes.

Its purchase or possession requires a license granted by the Ministry of the Interior through the Intelligence Centre against Terrorism and Organized Crime (CITCO). Their department works in collaboration with the Guardia Civil and has already carried out 26 inspections of establishments this year that trade in these products, and investigated 24 suspicious sales.

According to the statement, the potassium chlorate that has been intervened has a concentration of 99.8 per cent, so its sale is prohibited to individuals, and can only be purchased by those who use it for their professional or industrial activity. It is so extremely sensitive that a Guardia Civil TEDAX team had to be brought in to handle its safe removal, as reported by diariodesevilla.es.