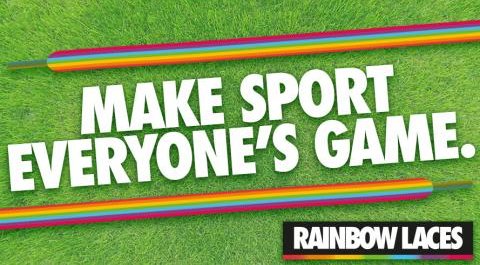 The Premier League begins its activation day for the Stonewall Rainbow Laces campaign this Saturday 27 November. Players from all of the league will wear the colourful additions to their boots as a signal for LGBTQ+ inclusion in sports and for rights in everyday life. “Lace up and Speak up is the key message that Stonewall want to put across for this year’s annual activation day.

Liverpool captain Jordan Henderson is a supporter of the campaign and has written his support in the programme notes of his team’s game against Southampton on Saturday. “I can only really speak for myself when I say that it has made an impact in raising my own awareness on the subject,” wrote Henderson. “Each season when it comes around, it makes me stop and think about how much further football in particular needs to go before the game can consider itself properly inclusive.

“Be it those who play or people who come to support, you don’t have to look very far to see that there is a lot more the game can do, in this country, to be more welcoming.”

With a fresh look this year the central call to action is for athletes, coaches, officials and fans to wear laces while also contributing to conversations to help ensure people who are lesbian, gay, bi, and trans feel welcome and comfortable in their sports spaces and environments.

One in five sports fans still believes that anti-LGBTQ+ language is harmless if it is just meant as a ‘joke’ or ‘banter’ according to research carried out last year by Stonewall. A recent study found that across Europe, eight in ten (82 per cent) of LGBTQ+ people active in sport have witnessed homophobia, biphobia and transphobia in the preceding 12 months.

This is one of the reasons why Stonewall and the Premier League believe that this campaign is still relevant and needed. A statement from Stonewall Rainbow Laces campaign reads: “There’s still a long way to go before every lesbian, gay, bi, trans and queer person can bring their whole selves to the sport that they love.

“That’s why this year we want Rainbow Laces to take inclusion to the next level and start a conversation about what creating inclusive environments for LGBTQ+ people in sport really means.

“Whether you’re a team, an athlete, a fan or a player, your voice makes a difference. Together, we’re urging people to Lace Up and Speak Up for LGBTQ+ inclusion, and truly make sport everyone’s game.”