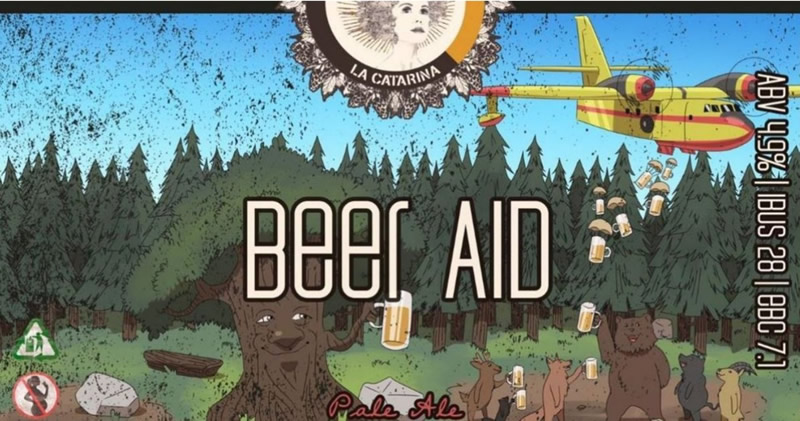 The terrible fire that broke out in Jubrique on September 8, and devastated around 8,400 hectares of the Sierra Bermeja, was the worst blaze in the history of Malaga province.

“We are on the Guadalmansa river, in Estepona, and, at night, both clients of the restaurant and ourselves could not stop looking at the burning mountains. It affected us a lot. After witnessing this catastrophe, we decided to design some action in recognition of all the troops. and in turn as a collection action to help with what we know how to do”.

Those are the words of the owners of the La Catarina craft brewery, which manufactures beer in the Malaga municipality of Estepona. They have now created a limited edition beer dedicated to all the people who participated in the fire’s extinction efforts. All the costs of which have been borne by one of the brand’s partners.
Their new brand has been christened ‘La Catarina Aid’, and 10 per cent of all its sales will be donated to the various recovery plans that are being carried out in the coming months. Around 700 litres of this beer have already been put on sale. It has been brewed without additives, and without pasteurisation, and comes in two formats, 33cl bottles at €2.50 each, or in barrels.

As explained by Ignacio, one of the owners of La Catarina, “We have created a nice label. We are aware of the enormous tragedy that it has entailed, even with the loss of a human life, but the fire was controlled by the rain, and that inspired us with the illustration on the label”.

During a presentation this Saturday, November 27, in Cat’s Kitchen, Garvayo explained the label’s design, “In it, you can see rain over a forest, but with beer, an airplane that throws beer mugs from the sky with which trees and animals finally toast what that nightmare was. Natural beer to help nature. Help while enjoying”.

Attending the special evening were members of Infoca, the rescue team, environmentalists, friends, and neighbors from Estepona, where they toasted the heroes and all involved with fighting and extinguishing the terrible fire of Sierra Bermeja.

La Catarina will take this drink to Genalguacil and Jubrique – the main municipalities affected by the fire – in the next few days. These areas will be the biggest beneficiaries of this pro-Sierra Bermeja action. In the course of the presentation, the brand donated 1,000 bottles “to the many people who fought to extinguish the terrifying fire in our beloved Sierra Bermeja”.

Bottles of this limited edition beer are for sale in the local shops of Marbella and Estepona, in hypermarkets, or from the website: lacatarina.beer.es, as reported by laopiniondemalaga.es.