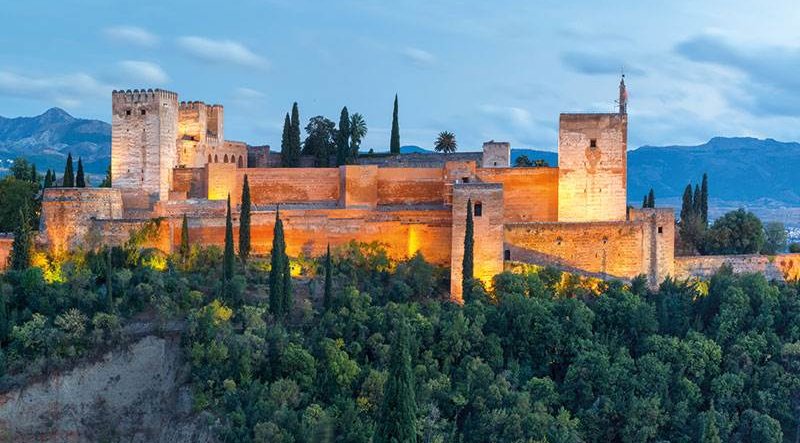 The Andalucian province of Granada has most municipalities 'free' from Covid-19. image: Wikipedia

As of 2021, Spain has 49 properties inscribed on the World Heritage List, of which seven are in Andalucia. The Andalucia UNESCO World Heritage sites are chosen for their historical or cultural significance. Four of the world heritage sites, not surprisingly, cover the long period of Muslim rule of al-Andalus.

We start at perhaps the most famous UNESCO site in Spain, the Alhambra Palace in Granada. The Alhambra Palace was built by the Muslims who ruled al-Andalus for over 700 years. It is probably the best-preserved example of Moorish architecture in Spain. What many people do not know is that the old district of Granada, known as the Albayzin and the Palace Gardens, Generalife are also part of this unique UNESCO site.

Moving on we arrive at Córdoba, once the limit of navigation on the mighty Rio Guadalquivir. The whole of the city centre has been designated a world heritage site, including the beautiful Mesquita. Originally a mosque dating back to the eighth century, famous for its forest of columns, the structure was considered so beautiful by the Christian monarchs that, after the reconquest of Córdoba, it was preserved and a Renaissance style church was built within the mosque. A truly unique edifice. Córdoba was not only the first capital of al-Andalus, it was also a centre of learning. Scholars of all faiths flocked to Córdoba to take part in scientific ventures patronized by the rulers. Visit the Calahorra fort to see some of the wonderful advances the Muslims made in all the scientific fields. Córdoba was the most advanced city in Europe. Its population enjoyed running water in private homes, paved streets, streetlights, lush gardens, and a rich bounty of foods, medicines, clothing, and crafts when the rest of Europe was in what has been termed, the dark ages.

Outside Córdoba is another Muslim treasure, Medinat Al-Zahra, the ‘Shining City’, built as a city for a mighty Arab ruler. Medina Azahara as it is known today, was built in 40 years, flourished for 40 years and then perished in flames and was forgotten for one thousand years, a timeline straight out of ‘Arabian Nights’. This site is the latest introduction to the Unesco World Heritage List for Andalucia, inscribed in two thousand and eighteen.

Downstream from Córdoba, we arrive at Seville. Here we can see almost the entire Muslim and Christian history of Andalucia. The city became the capital of al-Andalus for almost two hundred years. The world heritage sites include the Royal Alcazar, a succession of palaces started in the Muslim era and that continued into the Christian period together with a series of gardens enhanced by each monarch. The cathedral is a very Catholic structure, apart from the 12th century Muslim, Giraldo tower at one end. Seville’s central role in the exploitation of the Americas after 1492 is celebrated in the Archivo General de Indias, part of the world heritage collection and a modern-day wonder with forty three thousand volumes containing eighty million pages now housed on nine kilometres of shelving.

Following the reconquest, many cities were rebuilt including Baeza and its close neighbour, Úbeda. Both were reconquered early, in 1227, by Ferdinand III. Whilst Baeza was abandoned without a fight, Úbeda was totally sacked and up to sixty thousand of its inhabitants were slaughtered or enslaved. Both cities rose from the ashes and were rebuilt in a glorious cacophony of Renaissance styles. Visitors to the two towns are encapsulated in a time warp, surrounded by architectural wonders, palaces and mansions, churches and monasteries and, in Baeza, a university alongside the imposing cathedral. Unesco describes them as Renaissance Monumental Ensembles.

Follow the Guadilquivir to its estuary and, on the north bank, you will find Andalucia’s only world heritage site dedicated to nature. Doñana is a complex mosaic of landscapes forming a paradise for birds in the most important wetlands in Europe. Situated between the provinces of Huelva, Seville and Cádiz, Doñana is now a labyrinth of land and water that shapes the marshes, spectacular lakes and channels, reserves and pine forests, streams and banks, dunes, beaches and cliffs. The Doñana is also one of the three National Parks found in Andalucia.

Finally, we go right back in time to a period predating the pyramids of Egypt. The Antequera megalithic dolmens, Menga, Vera and Romeral, were built between three thousand eight hundred BC and two thousand five hundred BC. These monumental tombs were once thought to have been built by aliens or gods. In reality, they were built by the Neolithic people that inhabited this area. Whole tribes of them working together to create a megalithic complex that was part religious and part ceremonial that still leave us in awe today.

A tour of the Andalucia UNESCO World Heritage is an exciting journey through time, to discover parts of Andalucia missed by the normal tourist.

By Nick Nutter of visit-andalucia.com