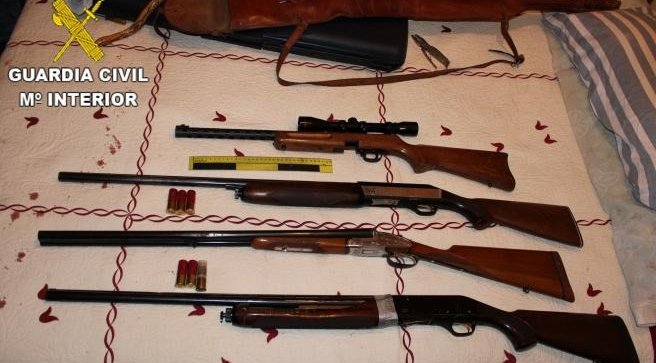 Firearm brawl leads to 5 arrests for attempted murder in Spain.

Officers from the Guardia Civil have arrested five people from the town of Escalona. The four men and one woman are aged between 43 and 75 years old. The people were arrested for alleged attempted murder and for the illegal possession of firearms. The people had allegedly attempted to murder a person during a fight on November 27.

All detainees belong to two families who were involved in a firearm brawl. Officers carried out two house searches where they discovered six long firearms, according to the Armed Forces.

On the afternoon of November 27, the Guardia Civil‘s Operational Services Centre (COS) received numerous calls to say that a brawl had broken out between two families. Shockingly the families were using firearms to battle each other. Multiple patrols were deployed immediately to the scene of the fight.

Officers arrived on the scene to discover four people with firearm injuries. The people were from the same family and received medical treatment on the scene. There were then transferred to Toledo’s Virgen de la Salud Hospital.

The families had previously had a verbal confrontation but this time they decided to fight each other with firearms. The investigation of the incident was taken over by the Judicial Police Team of the Guardia Civil of Torrijos.

In the days following the shootout the four people who had been transferred to the hospital were arrested when the hospital discharged them. Another person had been arrested after the houses were searched.