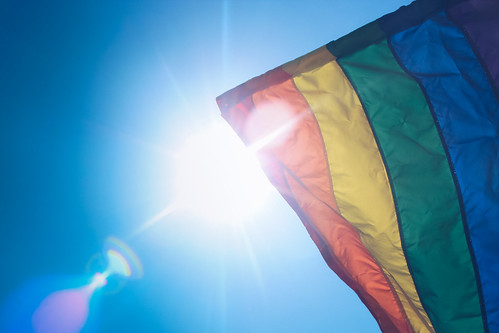 rainbow flag" (CC BY 2.0) by stockcatalog

Nassar Al-Khater, president of the organizing committee for the 2022 world cup in Qatar, has confirmed that “homosexuality is not allowed” in the emirate, but promises that LGBTQ+ football fans will have the right to travel to the country and attend the games. He added that “public displays of affection are frowned upon and this applies to everyone.”

The Qatari leader explained this issue in an interview with CNN and responded to some questions relating to the country’s human rights record. He said: “Qatar and neighbouring countries are much more conservative and we ask the fans to respect it. We are sure that they will, just as we respect different cultures, we hope that ours is [respected] too.”

Al-Khater wanted to assure that all LGBTQ+ football fans attending the World Cup would be safe, regardless of their sexual orientation or culture. “They will come to Qatar as fans and attendees of a soccer tournament and they will be able to do what any other human being would do”, he stated.

Josh Cavallo, the Australian who is currently the only out and active male pro footballer, has recently acknowledged his fear about going to Qatar and was the person to ask the question of Al-Khater. The president of the committee insisted he and all LGBTQ+ football fans would be welcome if they went. “On the contrary, we welcome you and invite you to come to see the country before the World Cup. No one feels threatened here, I think the perception of danger is due to the multiple accusations and news that give a negative outlook to the country”, claimed Al-Khater.

Cavello has expressed his cautiousness about the trip. “I read something along the lines of that [they] give the death penalty for gay people in Qatar, so it’s something I’m very scared [of] and wouldn’t really want to go to Qatar for that,” he said.

“And that saddens me. At the end of the day, the World Cup is in Qatar and one of the greatest achievements as a professional footballer is to play for your country and to know that this is in a country that doesn’t support gay people and puts us at risk of our own life, that does scare me and makes me re-evaluate – is my life more important than doing something really good in my career?”