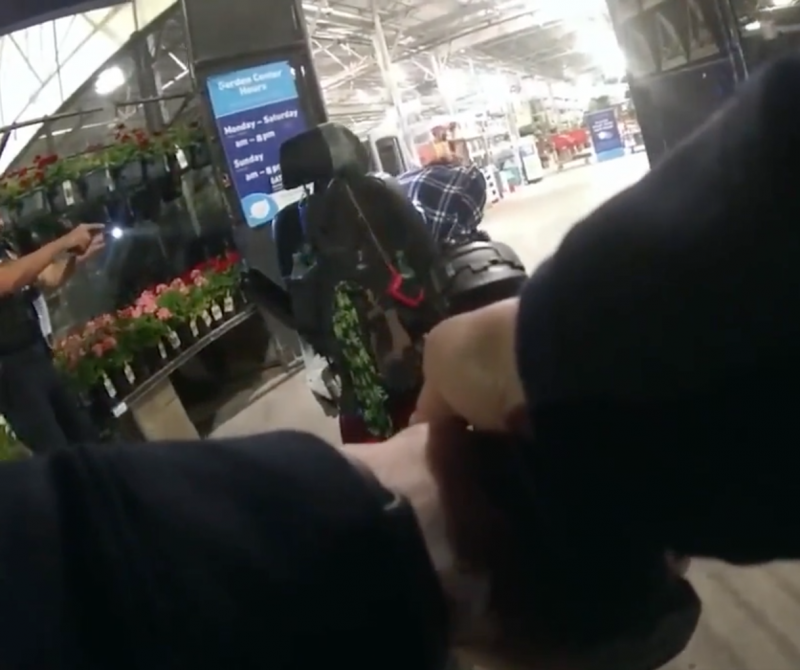 The man was shot nine times by the off-duty officer.

A US police officer shoots dead a wheelchair-bound shoplifter in disturbing footage released by the Tucson Police Department.

The video shows off-duty officer, Ryan Remington, fatally shooting a man nine times in the back and side as he rolled away from him in an electric wheelchair. 61-year-old Lee Richards Richard was shot after allegedly stealing a toolbox from a Walmart and brandishing a knife, according to police.

Remington, who was working as a security guard in a retail area, had been called to help by a Walmart employee when the incident happened, according to Tucson police chief, Chris Magnus.

“According to the employee, he caught up with Mr. Richards outside as he fled the store and asked to see a receipt for the toolbox,” CNN quoted Magnus as saying.

“Instead of providing the receipt, Mr. Richards brandished a knife and said, ‘Here’s your receipt.'”

Magnus told a press conference he was “deeply disturbed” by his officer’s actions.

“His use of deadly force in this incident is a clear violation of department policy and directly contradicts multiple aspects of our use of force and training.

“As a result, the department moved earlier today to terminate Officer Remington.

Following the incident, the hashtag #DefundThePolice once again started circulating on Twitter with one user highlighting the recent events in New Jersey as another example of police officers breaking the law.

The New Jersey incident saw off-duty police officer Louis Santiago kill a pedestrian before driving the victim’s body home and returning to the scene with the dead man in his back seat.

Tucson, AZ Police officer Ryan Remington shoots and murders a 61-year-old man in a motorized wheelchair from behind.