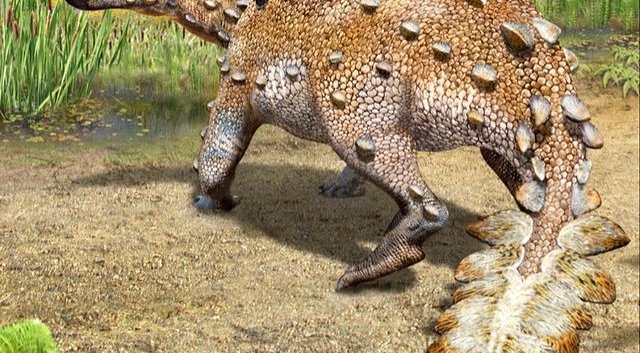 A new dinosaur species characterised by its strange weapon-like tail has been discovered in Chile.

With a size of approximately two metres, the small armoured dinosaur of the Ankylosaurus genus dates from the late Cretaceous Period, from between 71.7 and 74.9 million years ago. Its fossilised skeleton, practically complete, was found in the province of Magallanes, in the southermost region of Chile, Patagonia.

The dinosaur, named Stegourus elengassen, had developed a large weapon-like tail unlike anything previously seen on other types of armoured dinosaurs, such as the pairs of spikes on the Stegosaurus.

While its skull had features similar to those found in other types of Ankylosaurus, the shape of the tail had never before been seen in other dinosaurs, according to the study published this Wednesday in the journal Nature. The dinosaur’s tail had seven pairs of flattened bone deposits in a fern-like structure.

“The tail is extremely strange, as it is short for a dinosaur and the end is covered with dermal bones (bones that grow on the skin), forming a singular weapon,” said Sergio Soto Acuña, author of the study and doctoral student at the University of Chile.

Soto said that the tail looked like that of a rattlesnake or lizard, but unlike them, it was formed of real bones. The most similar feature in another species would be the tail of a type of giant armadillo, which is also extinct.

Fossilized plants discovered in the same region indicate that the climate was warmer during the period when the dinosaur lived, extremely different from the current icy climate that is characteristic of Patagonia.