Calahonda at the double 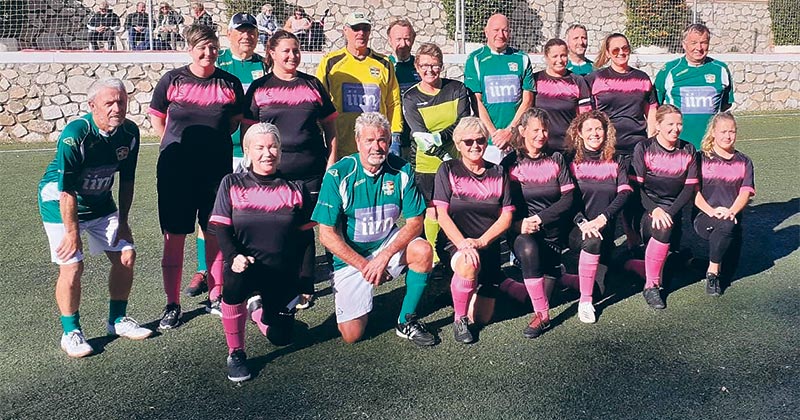 A good week for Calahonda WFS with an excellent 2-0 away win in the Hidromaster Premiership against a strong Sporting Benahavis team at San Pedro on Tuesday evening, November 23.

The drizzle soon turned to heavy rain making a slippery surface, and passing had to be accurate and goalkeepers on their toes.

Tomas Otero put the whites ahead in the first half. The game could have gone either way in the second half until an inspired substitution by the manager saw Ian Ingram put the ball in the net off the post from an excellent pass from sub Dave Williams.

This win for Calahonda over the Walking Dead takes them to within one point of the league leaders. Manager Lesh Brzuzy is delighted at the team’s recovery after losing their opening match at Viñuela.

The seniors took the historic cup honours. Saturday November 27 saw walking football history made at the Finca Naundrup. A female team played a male team for the first time in a competitive match in the south of Spain (probably all of Spain) when Benalmadena ladies lined up against Calahonda WFS in the first round of the Baha Whisky Cup.

The greens fielded four over 70 players who rarely feature for the first team and they went about a difficult job being on a hiding to nothing taking a quick two goal lead. By half time Calahonda were 9-0 up with the ladies finding it difficult to cope with the pace of the game. They did improve in the second half restricting the greens to only two more goals for an 11-0 score line. Scorers were Nigel (six), Seymour (three), Ingram, and T  Jones with one each. Special mention for Rosie’s skills in the ladies team.

The ladies were disappointed but not undaunted and manager Kirsty said they had enjoyed the experience, learned from it and would be back.

Calahonda join the Walking Dead A team in the next round.

Tuesday November 30 saw Malaga a play Atletico Benahavis and Malaga B face Sporting Benahavis in the Hidromaster league matches at El Cañadon (Coin Road). Results and reports in next week’s Euro Weekly News. Make sure you get your copy!!!

Charity match for the Malaga orphans Saturday December 4, El Cañadon 1 to 3pm. East v West Angels. Come along and see the fun and help a worthy cause!!!