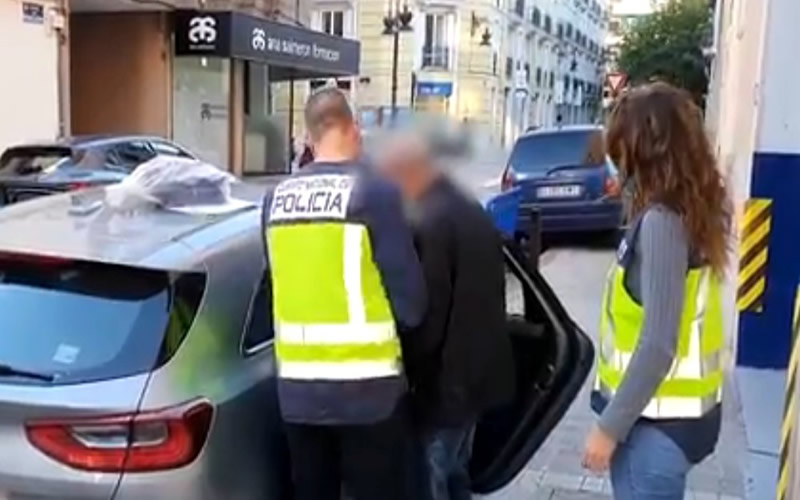 A retired local policeman, Juan Jose GH, aged 62, has been arrested by National Police officers in the Valencian municipality of Xirivella. He is charged with being the alleged perpetrator of the crimes of murder and arson, as a result of which, his wife died.

His wife’s body had been found partially burned in a house in the town of Mislata. The detainee tried to pretend that the fire had started accidentally, but an autopsy revealed that the woman had no traces of carbon monoxide in her lungs, so she had already been dead when the blaze began.

This incident occurred on December 24, 2020. A call had been received that day by the 112 emergencies service, informing them of a fire in a house in Mislata. Once the fire was extinguished, firefighters found the woman’s body partially charred.

Mislata National Police station launched an investigation, with the collaboration of the police forensics officers, and fire specialists, who requested a report from the firefighters to determine the cause of the fire.

The deceased woman’s husband stated that he had found the dining room on fire when he returned home after walking his dog. According to the 112 operator, the man had acted strangely during his call, an indication that raised the first suspicions of the Police.

A Police Forensics Department report confirmed that the autopsy results proved that the woman suffered a violent death, possibly due to asphyxia before the fire. Their investigations had been ongoing for almost 12 months, but on Thursday morning, December 2, officers from the Murder Squad arrested the husband.

Today, Friday, December 3, the detainee appeared before a judge, who decreed his entry into prison. It was revealed that in 1998, the alleged murderer had spent nine months in prison after being accused of raping a woman during a police intervention for a case of gender violence in Mislata. The victim, Trinidad G, had died at La Fe Hospital some days after a fire broke out at her home.

This fire broke out two days before the officer’s trial. The coincidence prompted an investigation, although the National Police could not determine that the causes of the fire were not fortuitous. The Valencia Prosecutor’s Office then requested ten years and six months in prison for Juan Jose GH, but he evaded the full sentence, as reported by lasprovincias.es.