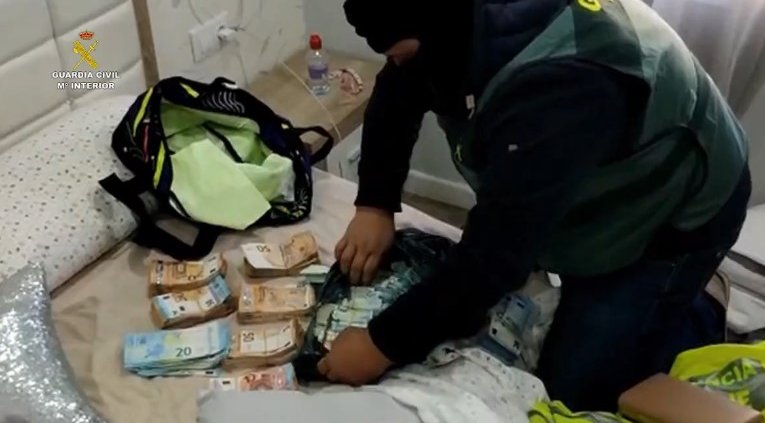 The Guardia Civil, as part of ‘Operation Polvora’, has dismantled a criminal organization that smuggled large quantities of hashish onto the coasts of Malaga and Cadiz. Forty people have been arrested as a result.
A total of 5,770 kilos of hashish have been seized, along with 17,250 packets of tobacco. Also confiscated were 25 vehicles – many of them high-end – 21 of which have been recovered, as they were stolen.
In addition, € 268,000 euros, two handguns, and a shotgun, as well as a drone, communication equipment, and abundant documentation have also been seized.
This operation began last April when the Guardia Civil seized 2,675 kilos of hashish in a nursery. In this action, 2 people were arrested, and 6 cargo cars that had been previously stolen were recovered. From that moment on, officers became aware of how the organisation worked.
The new panorama of the organisations dedicated to drug trafficking in the Campo de Gibraltar has changed in recent times, nowadays they are assimilated to subcontracted companies within a business network.
Thus, the network investigated in ‘Operation Gunpowder’ was clearly in charge of carrying out all the tasks related to the introduction of large consignments of hashish. These are the operations that are carried out on the mainland, i.e. collecting the narcotic substance after having been delivered on the coast, transferring it to the drug dens, and then distributing it.
The dismantled organisation introduced large quantities of drugs and tobacco, and the Guardia Civil detected that they were able to introduce 6 tonnes of hashish per week. In order to reach these levels, the group relied on the fact that they were very familiar with the areas where the drugs were being smuggled.
Those arrested began working mainly in the Cadiz municipality of Puente Mayorga, but under pressure from the Guardia Civil, they moved to the coast of Malaga, more specifically to the town of Manilva. To do so, they carried out exhaustive studies of its coasts and roads.
The investigators learned that the network had around ten ‘nurseries’ between the Cadiz towns of San Roque and La Linea de la Concepcion, and Manilva in Malaga, in which to hide the hashish and the stolen vehicles.
It was also detected that the modus operandi most commonly used by the gang in its stashes on the Puente-Mayorga and Guadarranque beaches consisted of using small inflatable boats. A large group of people would then be employed to transfer bales of hashish resin from the powerful boats that cross the Strait to the cargo vehicles.
San Roque Court No1 granted permission to conduct 31 searches in the towns of La Linea, San Roque, Algeciras, Manilva, and Malaga, in which 300 officers from the Algeciras and Malaga police stations, as well as from OCON-SUR, CRAIN, and GAR participated.
In one of the searches, €50,000 in cash was found in the school bag of the underage daughter of one of the detainees. A further €150,000 euros were later found under the mattress in the master bedroom, which the owner of the house claimed was the result of his savings.