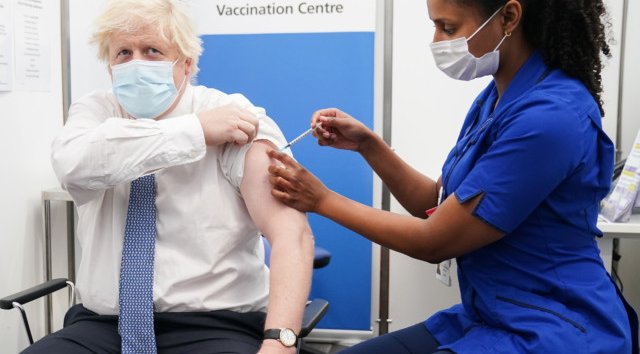 Boris booster: PM gets his COVID jab ahead of Christmas holidays. Credit: YouTube

Boris Johnson’s latest announcement on his plans to deal with the rise in Omicron infections, will it is said, require 1.1 million vaccinations a day. This is twice the highest number ever administered by the NHS with the record standing at 532,238.

Johnson, the UK Prime Minister, is facing increasing unhappiness from all sides over his efforts to control the spread of the virus. This has led to delays and recriminations and finally last night the shift of the risk level to four, the second highest, following advice from the four chief medical officers.

The army and extra NHS staff are to be deployed in an effort to meet the ambitious target of vaccinating all over 18’s by the end of the year – effectively that means 1.1 million booster vaccinations every day including the public holidays.

Launching what he described as the ‘Omicron Emergency Boost’, Johnson said everyone over the age of 18 who was vaccinated at least three months ago, should be given a booster jab.

The plan involves drafting in military planning teams, opening additional vaccine sites and mobile units, and extending opening hours for clinics so they run seven days a week. Thousands of extra volunteer vaccinators will be trained and more staff moved from normal duties in the NHS to help in the drive.

During his address to the nation, covered by Euro Weekly News last night, the Prime Minister said the UK was “now facing an emergency in our battle with the new variant” and “that it was now clear that two doses of the vaccine are ‘simply not enough to give the level of protection we all need”.

It is understood that clinicians have said that a third booster will be enough to provide the level of protection sought, a mammoth task that will require 1.1 million vaccinations a day.