The stunning Christian shrine inside a holy cave in Spain 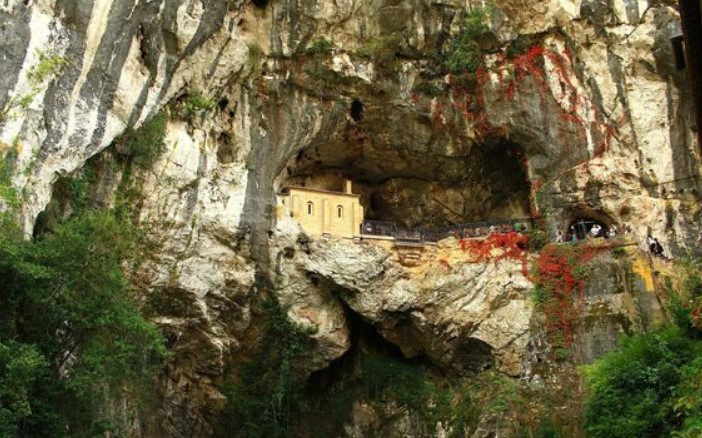 The stunning Christian shrine inside a holy cave in Spain

The Santa Cueva de Nuestra Señora de Covadonga (Holy Cave of Our Lady of Covadonga) is a Catholic sanctuary cave in the Picos de Europa mountains in the north of Spain. The name refers to the sanctuary, dedicated to the Virgin of Covadonga, where the first battle of the Spanish Reconquest took place in 718.

Its origins are controversial. It seems to have been, originally, another place of confluence of Pagan Cult. Christian legend has us believe that Pelagius, chasing a criminal who had taken refuge in the cave, meets a hermit who was venerating the Virgin Mary.

The hermit asked Pelagius to forgive the criminal, since the criminal had resorted to the protection of the Virgin, and says that one day, he too would need to seek shelter in the cave.

Construction in the Holy Cave dates back to the reign of Alfonso I of Asturias, who, to commemorate the victory of Pelagius over the Muslims, built a chapel dedicated to the Virgin Mary. That gave rise to the invocation of the Our Lady of Covadonga (popularly known as La Santina). It contains an altar dedicated to the Virgin, plus two others, for Saint John the Baptist, and Saint Andrew. Alfonso presented this church to the Benedictine monks.

In 1777, when the cave was covered in wood, a fire destroyed the medieval Marian statue. The current wooden image of Virgin and Child dates back to the 16th century, and was donated to the sanctuary by the Cathedral of Oviedo in 1778.

During the civil war, the Virgin image disappeared and in 1939, it was found in the Spanish Embassy in France. The present chapel of Romanesque style is the work of Luis Menendez-Pidal, and Alvarez.

The shrine of Covadonga was very important for the early 8th century Christian kingdom of Asturias. Several members of the royal family were buried in the Panteon Real de Covadonga, like Pelagius, the first king of Asturias, who died in 737.