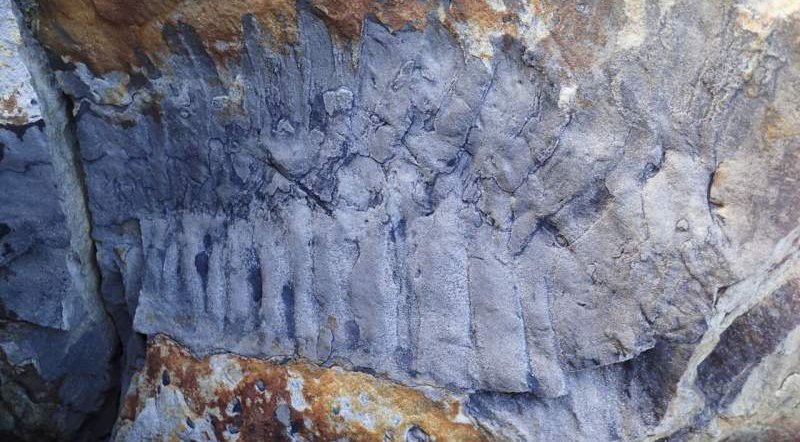 A GIANT millipede fossil was found on a UK beach, in a discovery described as “a complete fluke”. Scientists believe the remains are of the world’s biggest-ever bug.

The huge 8.9ft-long fossilised insect dating back 326 million years was uncovered on Northumberland beach at Howick, located 40 miles north of Newcastle, by a “fluke” after a section of cliff fell onto the shore.

“It was a complete fluke of a discovery,” said paper author and sedimentologist Neil Davies of the University of Cambridge.

“The way the boulder had fallen, it had cracked open and perfectly exposed the fossil, which one of our former PhD students happened to spot when walking by.”

The fossil was extracted from the boulder in May 2018, after the team had acquired permission from both Natural England and the landowners, the Howick Estate.

“It was an incredibly exciting find, but the fossil is so large it took four of us to carry it up the cliff face,” Dr Davies added.

The creature, known as Arthropleura, showed that the species would have been as long as a car and weighed 50kg as it hunted across Northern England during the Carboniferous Period, around 100 million years before dinosaurs inhabited the Earth, according to the Evening Standard.

Speaking about what the giant millipede’s diet might have looked like, the scientist said it must have found a nutrient-rich plant diet and may even have been a predator, feasting on other invertebrates or small amphibians.

Dr Davies said: “While we can’t know for sure what they ate, there were plenty of nutritious nuts and seeds available in the leaf litter at the time, and they may even have been predators that fed off other invertebrates and even small vertebrates such as amphibians.”

The fossil will go on display at Cambridge’s Sedgwick Museum in 2022.