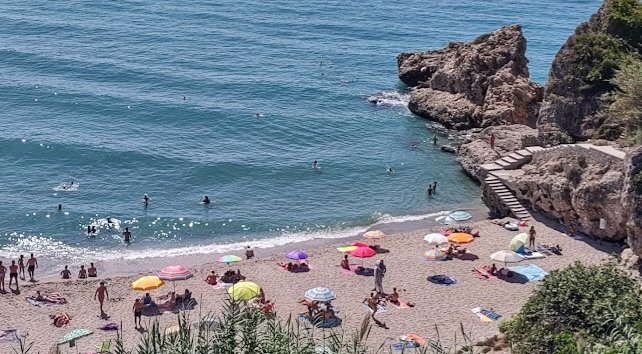 This Monday, December 20, saw a team of three members of the Diving Unit of the Spanish Navy, deployed from their base in Cadiz to deal with an explosive device that had been located on the Burriana beach in Nerja.

A controlled detonation had to be carried out of an old, discarded, United States Army military flare. Two local fishermen, Francisco Pastor and Jose Cabello, contacted the Local Police first thing this morning, explaining that they had removed the item from the water last Friday, and left it in the sand.
“We thought it was a fire extinguisher from a boat or something like that. We left it so that the cleaning services took it, but throughout the weekend it has remained in the sand, and there have even been children playing with it”, they confessed to SUR.
The military team carried out the work of deactivating the explosive, which was composed of phosphorus, a highly flammable material. This type of flare is used in maritime navigation for military operations, or even merchant ships, in case of emergency, since the flame remains active even when in contact with water.
“It was two foreigners who come to bathe every morning at the beach who told us to call the Police, because it said ‘danger, do not touch’, even so, we took it and placed it between stones in the boardwalk”, admitted Cabello.

The Guardia Civil immediately cordoned the area off and has notified the Navy. It actually required three controlled detonations to fully deactivate the device. The final one saw the complete combustion of the material, generating a large column of smoke, and a small fire, which took more than 30 minutes to extinguish.

Eventually, at around 5pm, two hours after starting the procedure, the navy team finished their task. They removed the remains of the flare in a metal container.
One of the navy team explained to SUR, “Every month we have a similar event on the Spanish coast”. The event generated great commotion at the Nerja beach, which despite the unpleasant, cloudy, and cold day, saw dozens of onlookers gather. An ambulance from the local health centre was also on standby, just in case.
A police cordon had been made about one hundred metres from where the military specialists placed the device for the three controlled explosions. They did this in front of a large rock, known in the town as the ‘Piedra de Sanjuanear’, as reported by diariosur.es.