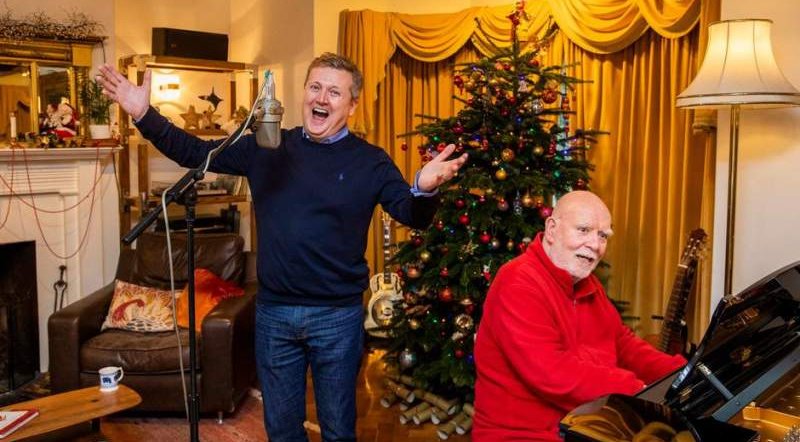 Famed welsh singer Aled Jones has team up with and a pianist and his son as he creates a Christmas song for dementia. The 81 year-old dormer music teacher and composer achieved fame recently when his son shared a video of him playing the piano that went viral

The video posted by son Nick, shows him challenging his dad Paul Harvey to improvise a tune using notes F, A, D, and B. His dad who was diagnosed with dementia in 2020 became an instant sensation prompting his appearance on BBC Breakfast.

The new single, Christmas Isn’t Just Another Day, was created specifically for Music for Dementia by Paul Harvey, his son Nick and his long-time friend and lyricist, Pete Talman.

Mr Jones, who provided the vocals, said: “I recall the first moment I saw Paul Harvey on TV and like the millions of others who saw it, I was blown away by his amazing talent, I remember being in tears watching his story. It remains one of the most positive rays of light during lockdown.”

He added: “Music has been a huge part of my life, I truly believe it has healing powers, we just need to look to Paul to see how transformative it can be. He comes alive when he’s in front of a piano.”

Speaking about the single, Mr Harvey said: “Writing a new Christmas song isn’t as easy as you might think – there’s a lot of expectation that comes with it, but I thoroughly enjoyed the challenge working alongside my son, Nick.”

Continuing he said “From the start I wanted to team up with Aled Jones on this project, he has a wonderful voice and he brings back fond Christmas memories.”

Music is known to help those with dementia, the song charity Music for Dementia hopes that as Aled Jones creates a Christmas song for dementia awareness of the issue will be raised. They are also hoping that it will help them to get music integrated into dementia care.