Ambulance catches fire on A-7 motorway in Malaga 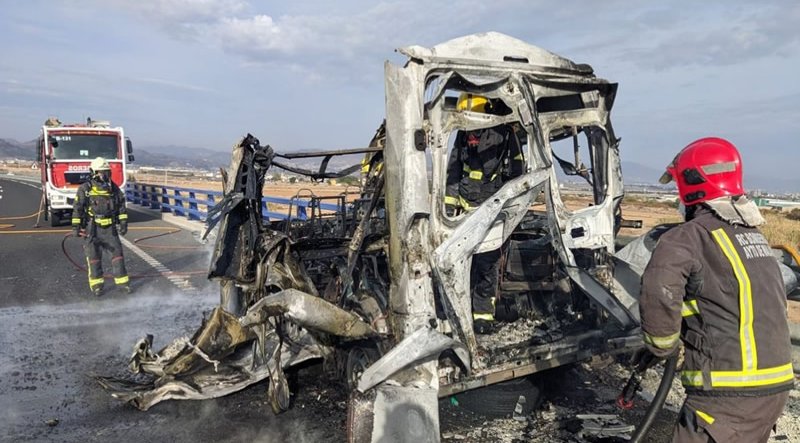 Ambulance catches fire on A-7 motorway in Malaga

Union representatives in Malaga have criticised a new incident that occurred today, Thursday, December 23, in the province’s health transport. It is reported that an ambulance of the Malagueña Health Assistance company (ASM), caught fire as it was travelling in the direction of Malaga, along the A-7 motorway.
According to the firefighters who were deployed to the scene, the cause of the fire was a breakdown of the vehicle, which subsequently caused the explosion of an oxygen bottle it was carrying. “This event is not new, last August we already denounced the fire of another ambulance in the Malaga municipality of Velez-Malaga“, they said in a statement.
As explained by Francisco Aranda, the head of Union Action in the Federation of Citizen Services (FSC) of the CCOO of Malaga, “Traffic had to be cut off due to the explosions of the O2 cylinders transported by ambulances”.
“The facts are being repeated. On this occasion, fortunately, there is no need to mourn any personal injury,” said the union representative. He did however point out that, “it is playing with fire, and another day it could occur during the transfer of a critical patient, and then we will have to talk about other types of misfortunes, which will not be material”.
Aranda highlighted that, currently, the health transport staff in the province of Malaga “is in a labour dispute. They are demanding better working conditions for the company’s staff, and dignified quality of care for citizens. Clearly, the events that have occurred give good reason to the requests of the union, and of all these workers”.
“From CCOO, we request for the umpteenth time that those responsible for the management of health transport in Malaga, actually manage the health transport in our province. Guaranteeing people’s health is a public duty we can not negotiate”, he added, as reported by laopiniondemalaga.es.