At least 37 die in fire on ferry in Bangladesh 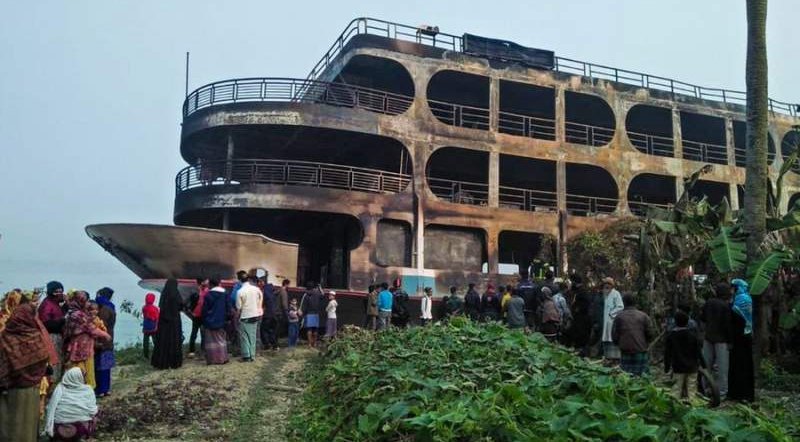 At least 37 people have died in a fire on a ferry in Bangladesh, the latest in a series of similar disasters to occur in the region.

At least 37 people have died and around one hundred have been injured on December 24, when a ferry carrying hundreds of passengers caught fire in the south of Bangladesh, reported the police.

The accident occurred in the early hours of the morning near the rural town of Jhalokati, around 250 kilometres to the south of the capital of Dhaka. The ferry was carrying around 500 people.

The Obhijan 10, a ferry with three decks, “caught fire in the middle of the river”, stated the llocal police chief Moinul Islam.

“We have recovered 37 bodies. The number of deaths may rise. Most of them died in the fire and others drowned after jumping into the river,” he added.

Islam also indicated that the flames had originated in the machinery room and spread throughout the ferry, which was full of people returning to their homes from Dhaka.

“We have sent around a hundred people with burn injuries to hospitals in Barisal,” he said.

The fire began at around 3:00 a.m. local time and spread rapidly, said witnesses.

“We were sleeping on the lower deck. All the passengers were asleep. My nine-year-old grandson, Nayeem, was with me, and he jumped into the river. I don’t know if he survived,” said one woman.

“When the fire spread, the people started to run. Many passengers couldn’t get out of the cabins where they were sleeping. Many jumped into the river,” explained one survivor from a hospital in Barisal.

This is the latest in a series of similar disasters to occur in this zone of the Ganges Delta. Experts from the south Asian country of 170 million inhabitants blame the accidents on lack of maintenance, poor safety regulations and overloading.

In August, the collision of a ferry with a cargo ship transporting sand caused at least 21 deaths in a lake in the east of Bangladesh. This type of boat sails with a large part of its structure submerged and is not easy to spot if the weather conditions are not good.

The ferry, which was transporting around 60 passengers, collided with the steel stem of the cargo ship. Submarine divers had to retrieve the bodies from the muddy waters of the lake.