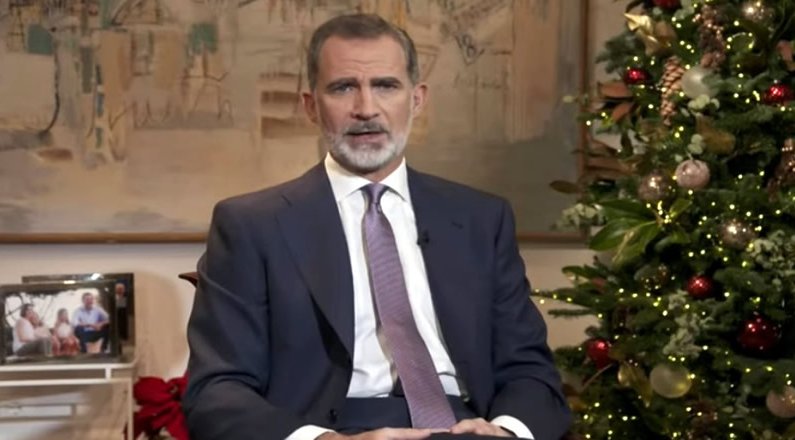 During his speech Don Felipe spoke about the worsening of the health situation in Spain, due to Covid-19, and, without mentioning his name, clearly hinted at the situation of his father, King Juan Carlos, on his second Christmas out of Spain.

Felipe VI dedicated his first words to express solidarity and support to the inhabitants of La Palma. “Today our hearts and our thoughts are still with you. We feel very close”, adding that they have the full commitment of all administrations, to rebuild their lives and the economy, as soon as possible.

He also stressed that the institutions, including the Crown, have to “respect and comply with the laws, and be an example of public and moral integrity”. Focusing on the pandemic, economic, and social recovery, the King paid attention to the role of institutional officials, whom he called upon to, “always keep in mind the general interests, and think about the citizens”.

“We must be in the place that constitutionally corresponds to us. Assume, each one, the obligations that we have entrusted. Respect and comply with the laws, and be an example of public and moral integrity”, proclaimed the head of state.

He demanded from the political parties, and Spanish society, “Consensuses that guarantee greater stability, greater well-being in homes, and give families the necessary peace of mind about their future”.

Felipe VI highlighted that what has been achieved in democracy, “has not been by chance”, and has been due “to the meaning of history, the great agreements, generosity, responsibility, and vision of the future.”

As symbolised by the Constitution, he said, “Its spirit calls us to unity in the face of division, to dialogue, and not to confrontation, to respect in the face of rancour, to the integrating spirit in the face of exclusion. It permanently summons us to a civic, serene and free coexistence”.

Speaking of the Magna Carta, which Don Felipe said, “has been, and is, the main beam”, that has sustained democratic coexistence in the face of “serious crises of a different nature that have occurred in recent decades”. Adding, “It deserves respect, recognition, and loyalty”.

As a “strong and responsible society”, the king has spurred citizens to face “the real crossroads” in which Spain and other nations find themselves. At the same time, to take advantage of the “historic opportunity” that European funds represent to modernise the country, “maintaining firm democratic principles, and values ​​that inspire coexistence”.

“We must react. We must understand and assume the new transformations that we are experiencing so rapidly. In what we do or decide from now on, we can continue to progress together with the most advanced nations, or we risk losing ground on our way”, he warned.

Stopping would be “staying behind, and going back”, which has influenced the need to move forward with “responsibility, willingness to collaborate and understand each other”, in addition to “relying more on one’s own forces as a nation”.

“History teaches us that we Spaniards have known how to react and overcome adversity”. he summarised.

Regarding the pandemic, he urged citizens “to do everything possible not to step back”, in the face of Covid-19, after stating that, “the risk has not disappeared” and that it is necessary to continue acting with “the greatest individual and collective responsibility”.

“The virus still has the ability to harm us,” warned the monarch, who, however, has observed that, compared to the previous Christmas, the situation is “different”, and progress has been made “substantially”, thanks to the process of vaccination, of which the Spanish can feel “especially satisfied”

There was also a special mention for the deceased during the pandemic. And the health workers, towards whom he expressed, “We give them immense thanks, with all our support and encouragement”, as reported by diariodesevilla.es.