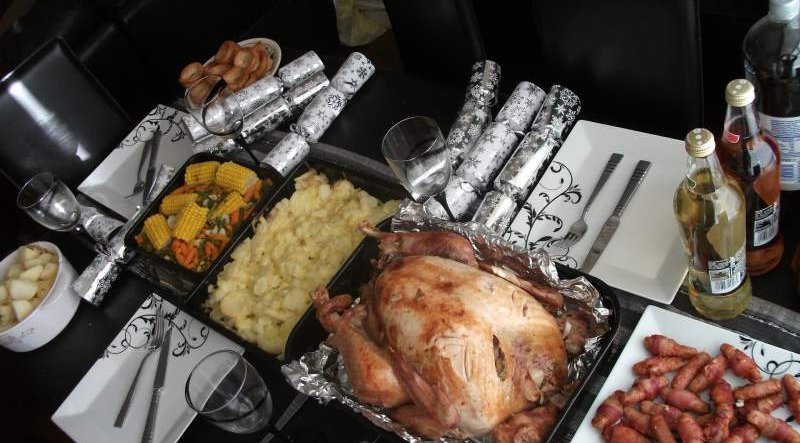 By now you will have enjoyed a Christmas feast, whether that was on Christmas Eve or Christmas day itself. If you are of English descent then it’s likely that you had Turkey, perhaps a ham and certainly all the trimmings followed by some Christmas pudding.

Of course not everyone is of English descent and not everyone will have had turkey, but do you know what people in other countries that do celebrate Christmas had for their dinner? Well you are in for a treat as there are some real interesting versions of a Christmas meal out there, many being based on what people can afford and what local ingredients are available to them. Weather also makes a difference, summer not exactly the best time for a traditional turkey dinner served with all the trimmings although many expats or recent emigrants still do follow a traditional British Christmas meal.

So let’s do a whistle-stop tour as there is just too many countries and varieties to cover in great detail.

Starting with Europe, a bird is enjoyed in most of Western Europe be it a turkey, a duck or a goose. This includes Belgium, France and Germany where the Christmas Eve meal will more often than not consist of a fish dish such as cod or carp, the bird being saved for Christmas day. Dessert in Germany usually consists cookies with the Belgians and French enjoying their famous cakes and pastries.

Southern European countries, those on the Mediterranean, tend to enjoy seafood with specialities like octopus and other shellfish being eaten on Christmas day. Cookies usually follow the meal and it is not uncommon for a special wine to be shared with family and friends.

Scandinavians, as is to be expected given the difference in their cuisine generally, will enjoy salted fish, a roasted pork, smoked or salted lamb with the meal accompanied by potatoes, cabbage and a beet salad. Dessert tends to be cookies.

Moving east fish takes centre place with carp common, the exceptions being Poland where a vegetarian “religious 12 dish meal” is common and Romania where special pork dishes are enjoyed.

The USA and Canada with their long British history enjoy similar Christmas meals with turkey forming the main meal. In the USA unusual dishes like pumpkin pie are served for dessert and are washed down with eggnog or other hot spiced drinks. In French speaking Canada turkey is less common with the main meal usually consisting of mixed meats.

In Mexico and other Central American countries they will often go to great trouble preparing dishes like tamales and spicy roast pork.

A  mixed bag with a  mixed heritage sees strongly African based countries like Jamaica enjoying goat for Christmas dinner along with a good dose of rum and rum based desserts. Cuba is the odd one out with the Christmas meal very much determined by lack of wealth in the country, the meal being based around basic staples. For those who can afford it suckling pig will take pride of place on the plate.

With Christmas is in the middle of summer antipodeans tend to have a turkey or a bird on Christmas Eve, with seafood and chicken BBQs being enjoyed on Christmas day. Meals tend to be served with fresh salads and fruit based dishes.

English enclaves like the one in summer spend Christmas in much the same way as the Australians with a combination of turkey and a braai (BBQ) usually of red meat and chicken.

But for Africans themselves a Christmas feast is a completely different affair with the best goat, beef or chicken saved for the big day, many of the continents population not able to afford quality meat very often. Roasted meats and stews are common and are generally served a dry version of with maize meal instead of potatoes, and little known vegetables like samp (dried corn kernels) and gourds like pumpkin and butternut.

The Spanish heritage plays a big part in South American cuisine with items like suckling pig likely to be eaten at Christmas. Meals are usually accompanied by bean and rice dishes and for dessert a variety of cookies. Some countries like Chile follow more the British tradition and in Brazil Portuguese dished like salted cod and the breast of the turkey.

Christmas is not celebrated in large parts of Asia so a Christmas feast is often not on the menu however there are some strange traditions followed at this time of year. In japan for example it is tradition to eat Kentucky Fried Chicken whilst Indians will eat sweet foods like milk solid balls soaked in syrup. For Russians and some of their neighbours it is a sweet porridge that is eaten on Christmas day.

Now that you have enjoyed your Chrismas feast and have some idea of what other’s around the world might be having for their Christmas, spare a thought for those unable to enjoy a special meal at this titme of year.

We hope you enjoyed the quick introduction to meals from abroad, let us know what you had and what weird and wonderful experiences you might’ve had with Christmas meals.