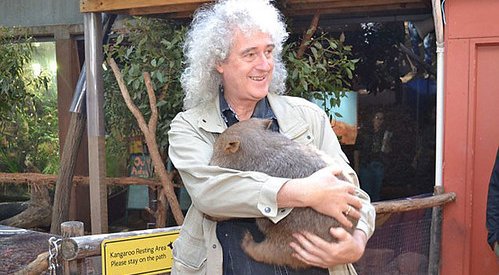 Queen co-founder Brian May “appalled” by the abuse of turkeys over Christmas.

LEAD guitarist and co-founder of Queen, Brian May, said he is “appalled” and “sickened” by the abuse of turkeys over Christmas.

Responding to a viral video that shows a live turkey peering into an oven to see a fellow bird being cooked, the 74-year-old said he was left “haunted”.

“This sad video has haunted me the last few days. You don’t have to be a vegan to be appalled by the gross abuse of these birds every year at this time,” May wrote to his 2.9 million Instagram followers.

“There are so many great ways to make your Christmas roast dinner delicious these days. I’ve been quite sickened by the endless advertising images of these poor dead animals on our TV screens over the last few weeks,” the musician continued.

To view the video, please click here. Below you can read Brian May’s comments.

According to EverythingWhat, three hundred million turkeys are killed in the US each year, with roughly 46 million turkeys losing their lives in the lead up to Thanksgiving and Christmas.

While around 14 million turkeys are killed in the UK each year – 2 million in the lead up to Christmas.

Thankfully for the turkeys, around 5 million Brits had their first-ever meat-free Christmas last year and 20 per cent of people will prepare an entirely vegan Christmas dinner this year, according to a survey from Applewood.

Interestingly, vegan Christmas dinners have less than 1/2 the carbon emissions of animal-based dinners.

In related news, an English council opts to go vegan as councillors vote to stop serving meat at events. The move is due to greenhouse gas and global warming concerns.

Oxfordshire County Council following a debate and subsequent ruling from the Liberal Democrat, Labour and Green Party alliance has led to the banning of meat and dairy products being served at official events.