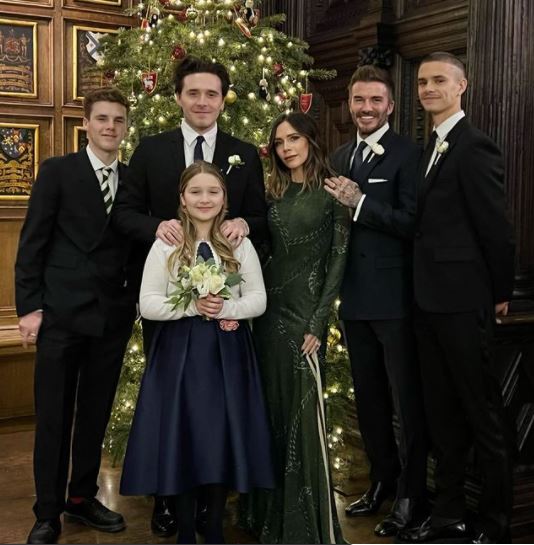 David Beckham has left fans in stitches when they noticed a funny detail in his family’s traditional festive snap. The Beckham’s Christmas photograph is a beautiful picture of the famous couple and their children, but the kids may well have outgrown the shot as it was noticed David standing on his tiptoes to match their height.

The former Manchester United footballer, 46, posed for the photoshoot with his wife Victoria and their four children – Brooklyn, Romeo, Cruz and Harper Seven. “Merry Christmas @victoriabeckham @brooklynbeckham @romeobeckham @cruzbeckham #HarperSeven #Family,” he captioned the post of them standing in front of their luxury Christmas tree.

However, eagle-eyed followers couldn’t help but notice that the England ace was actually standing on tiptoes as he cosied up to Victoria, and beside Romeo. All the way through the comments section, in between the good wishes, were comments pointing out the funny detail.

“David on his tiptoes,” one Instagram user said as a follower replied: ‘@davidbeckham I see that tiptoe action bud.”

“On tippy-toes Papa,” one wrote beside a string of cry-laughing emoji.

A fan questioned: “Is @davidbeckham standing on his tippy toes?!?!?”

“Does anyone else notice that @davidbeckham has to go on his tippy toes to match the height of his boys?” a follower added.

The Beckham’s Christmas photograph followed many more posts as they settled into their festive season fully. Earlier in the week, Victoria gave their fans a glimpse into the preparations, filming David as he roasted chestnuts in their fireplace, wearing a Santa hat and singing the iconic song as he went.

She captioned the brief clip: “Does anyone love Christmas as much as my husband?!? @davidbeckham kisses @adele #burninghisnuts”, as she mocked him for making an effort with his singing. He got his own back though, after making fun of Victoria back, jokingly comparing her singing to powerhouse vocalist Adele’s.